The Most Embarrassing “Jobs Agenda” Yet!!! Republicans Simply Need a Better Marketing Plan.

Framing is everything in politics, and lately, Republicans have been wildly off the mark. It’s not that people don’t understand their agenda, it’s that people get it, and Republicans don’t have a good focus group tested come back. 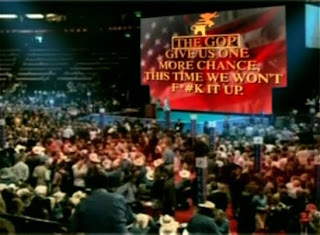 Politico: House Republicans unveil their vision of an agenda that promotes economic growth today, combining old prescriptions for lowering taxes, deregulating industry and boosting trade into a package they say complements their strategy to cut spending.

The proposal signals an acknowledgment from Republicans that they have to communicate to the public about how they would create jobs, not just how they would shrink government.

So here it is, with “Job” right there in the title; 'House Republican Plan for America's Job Creators.'
Poof, magical jobs will appear everywhere. They openly admitted as much:

What we are trying to portray is this: House Majority Leader Eric Cantor said earlier this week. ”The (plan) relies on economic growth to tackle our debt and create jobs.”

141 days and now a jobs plan? This old stuff? This is the same plan that tanked the global economy:

The plan calls for cutting taxes on corporations, individuals and small businesses to no more than 25 percent; allowing companies to repatriate foreign profits without being taxed; approving trade agreements with Colombia, Panama and South Korea; expanding domestic oil drilling; rewiring the patent process; requiring congressional approval of executive branch regulations that have a significant impact on the economy; and continuing to slash spending.


The document explains on its first page. "As a result, most Americans know someone who has recently lost a job, and small businesses and entrepreneurs lack the confidence needed to invest in our economy. Not since the Great Depression has our nation’s unemployment rate been this high this long.”


You don't have to admire the Democratic policy agenda to wonder if someone in Speaker Boehner's office shouldn't have raised his hand and pointed out that George W. Bush was president four years ago and he was a Republican, and perhaps there should be a pro forma mention of Wall Street and the financial crisis somewhere in this narrative. Sadly, the most significant employment crisis in generations has stopped generating new thinking and has become simply another opportunity to bash the other party while pushing your perennial agenda. That's a shame, because with 15 million unemployed and the recovery sputtering slight, we really do need new thinking and a sense of urgency on behalf of both the unemployed and the economy. In fact, we need it now more than ever.