Amazing but true, Republicans unabashedly support irresponsibly steam rolling their legislative party agenda against their political opponents, with no regard to debate or compromise. 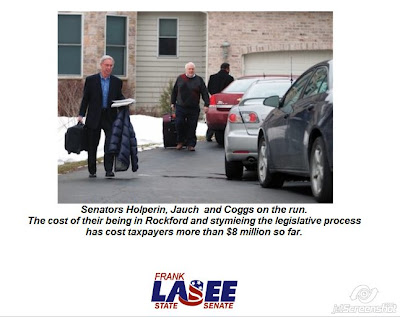 Lasee feels public outrage over bad public policy should not be
protested or cost the democratic process money.
Is this a dictatorship?
To demonstrate the lengths Republicans will go to make sure nothing can stop them, a former representative who’s back again as a state senator, has a new “regulation” to control the minority party:

Sen. Frank Lasee press release: On Wednesday, I introduced The Accountability to Constituents Act, which gives constituents the ability to have their senator or representative fined for not showing up to work in Madison. The Bill is also known as “You run, you pay.”

The bill requires any legislator who is absent without leave for more than three legislative days will have to pay a $500 per day fine. Any of their constituents can bring the charge.

Lasee feels Democratic Senators should in some way cater to their Republican constituents more so the ones who elected them into office:

Many of their constituents felt harmed by the fugitive 14. This bill will give them an action they can take. It will provide a real-world consequence for not showing up to work.

The party of father figure discipline, must punish those who disobey:


Legislators are elected to go to Madison to represent their constituents and vote on important legislation that is before them, whether they like the legislation or not. Legislators should be accountable to the people they serve.