It seems apparent that Republicans hate the country and constitution enough to repeal “United” from United States of America.

After reading the story below at the motley cow, I couldn't help but wonder how conservatives could ever again make the argument, Democrats hate America.


It's funny how one election that gave them one party control over a number of states is assumed to be forever. Maybe it will be through voter ID disenfranchisement or breaking the back of the middle class, but still, taking it to the next level of rewriting the constitution is beyond "conservative." 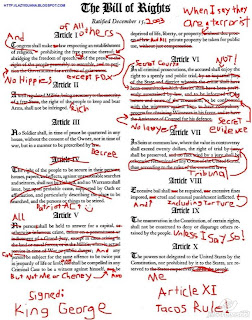 TPM: Republicans say they've found the problem in America -- and that problem is the basic framework of the Union as we know it today. A group of Republicans in the House and Senate are proposing an amendment to the Constitution that would allow a vote by two-thirds of the states' legislatures to override any federal law they did not agree with … a tea party favorite … touted by Sen. Mike Enzi, John Barasso and Orrin Hatch. In the House, Reps. Rob Bishop, Morgan Griffith and Paul Broun are leading the charge.

Remember the names of those willing to rip the constitutional in half. Hell, they’ve wanted to rearrange and remove parts of the constitution that bother them for years. Even Bush called the constitution "a god damn piece of paper" without one word of controversy. Yet they’ve managed to sell the idea that liberal Democrats hate America and whine incessantly about it.

[I]f two-thirds of the states collectively find a federal law or regulation abhorrent or misguided, they should have the power to repeal said law or regulation. The law would then be sent back to Washington for further consideration, at which time Congress may choose not to act again on the matter, or they may vote to override the states' repeal and pass it in finality.

Can you even imagine how convoluted such a process would be? How much time, money and effort would be directed away from current cavalcade of problems the fed and states have to deal with?

If I'm not mistaken, this sounds like a permanent anti-government Republican politicians employment plan. Who needs to manage solutions, when you can simply run on opposition issues.
Posted by John Peterson, Democurmudgeon at 5/18/2011 12:09:00 AM