What’s so wrong about taking corporate money out of state elections with public financing? Apparently, a lot. 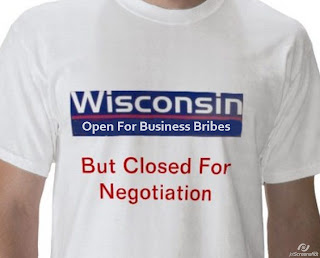 It was so wrong, the Republican finance committee couldn’t wait to get rid it! And just to rub it in the face of Democratic committee members and their constituents, they took the remaining money in the fund and financed one of the most restrictive voter ID laws in the country.

Sen. Bob Jauch gave this great impassioned speech on the issue that no doubt sailed right over the heads of his fellow Republican committee members, who voted in lock step with Gov. Walker’s proposal.


Jauch: "This is selling the Wisconsin election process...impartial justice is replaced with indecent exposure...the Supreme Court had Citizens United, this is Citizens Diminished."

JAY HECK, the executive director of Common Cause in Wisconsin, wrote this for the Cap Times: “In a stunning display of horrible judgment  … on May 25 all 12 Republican members on the Legislature’s Joint Finance Committee voted to end the state’s 33-year-old system for public financing of elections and to use the funds to implement the most onerous voter ID law in the nation. Both incumbent Supreme Court Justice David Prosser and challenger Joanne Kloppenburg agreed to accepted full public funding … Now Republicans … have invited special-interest groups and unlimited campaign money to fill the void left by the destruction of these reforms.

What should become an issue for the upcoming re-call elections,

If there ever was a reason to vote these special interest pleasing/looters of the public interest, out, then this would be it.