The Ryan Disconnect; Life vs Are we worth saving? 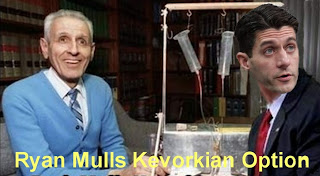 This great short CBS News interview, oddly casual, gets to the heart of Paul Ryan disconnects with his constituents. As soon as the topic gets close to the actual consequences of his "Path to Corporate Prosperity," Ryan automatically veers off into policy jargon. It's either cruelly intentional, or frighteningly sociopathic. For example:

Question: "Don't you think the issue no one wants to touch though, is how expensive end of life care has been, and whether you call it rationing or something else, at some point you really need to get serious and looking...does a 100 year old need dialysis...these kind of questions?"

Instead of trying to save a human life, without the concern for how much it costs, or the painful choice of self rationing, Ryan obtusely argues who should ration. Another words, the 100 year old is beyond the age of saving:

No, what we're talking about is not having to worry about having to decide at all, or what it will cost. But Ryan doesn't pick up on that all important humanity factor.

Ryan then continues to push the lie that an unelected government panel will make that decision for us. That panel of "unelected bureaucrats, created in the Patient Affordable Care Act," has not been given that power, and he knows that. It's the old and discredited "death panel" argument.

Darth Vader (Dick Cheney) “I worship the ground the Paul Ryan walks on,” he said referring to the Republican congressman from Wisconsin. “I hope he doesn’t run for president because that would ruin a good man who has a lot of work to do.”
Rep. Paul Ryan is a "sore loser" says NYT's Paul Krugman:

"Mr. Ryan may claim — and he may even believe — that he’s facing a backlash because his opponents are lying about his proposals. But the reality is that the Ryan plan is turning into a political disaster for Republicans, not because the plan’s critics are lying about it, but because they’re describing it accurately ... If anyone is lying here, it’s Mr. Ryan himself, who has claimed that his plan would give seniors the same kind of coverage that members of Congress receive — an assertion that is completely false ... 'If you demagogue entitlement reform,' says Mr. Ryan, 'you’re hastening a debt crisis; you’re bringing about Medicare’s collapse.' Maybe he should have a word with his colleagues who greeted the modest, realistic cost control efforts in the Affordable Care Act with cries of 'death panels.'"