Walker Wakes up to Sycophantic Urges, but only after Bipartisan Outrage

It’s the original intent of a proposed bill that I find more fascinating than what ends up getting passed into law. 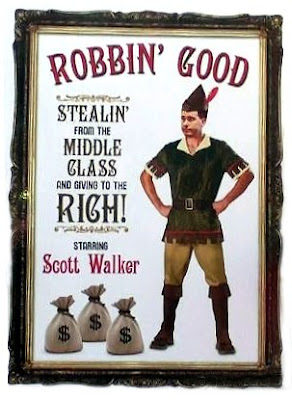 Although Scott Walker may have been shown the error of his ways, it was his servitude to big business that may have embarrassed even his devoted flock, to demand changes. Putting it simply, it was a taxpayer giveaway that dropped a lot of jaws around the state.

jsonline: Gov Scott Walker is planning substantial changes to a bill derided by some lawmakers as a "dubious giveaway" and "crony capitalism" benefiting insurance companies and other special interests, a Walker spokesman said.

And the cost to taxpayers was even worse than what was originally planned.

And a Department of Revenue estimate says that the $400 million bill, intended to jump-start job creation, would cost the state up to $590 million over 17 years. The final cost could be higher because the state would have to borrow part of the initial sum.

The portion of the bill that has drawn intense bipartisan criticism is the Jobs Now Fund, which would provide $200 million in state tax breaks to insurance companies in exchange for $250 million of their own capital. At the end of the fund's life, the capital companies would be allowed to keep 75% to 80% of the profits. And the companies would not have to reimburse the state for the tax credits.

Walker spokesman Cullen Werwie said Friday, "Certainly criticisms have been raised of the CAPCO part. ... It's something we're looking at.”


Reporter Dan Bice’s (conservative leaning but gets the facts right) article went on to state the obvious:
When governments give tax breaks, they are typically intended to benefit the payer who bears the burden of a tax. In this case, the state would be giving the tax credit to insurance companies which aren't paying, but rather collecting, the taxes that customers pay with their premiums, said state Rep. Bob Ziegelbauer (I -Manitowoc). "It would be as if we had a tax holiday on school supplies and let Wal-Mart keep the sales tax they collected," he said.
Even crazy Glenn did a spit-take:

Sen. Glenn Grothman calls the bill a "dubious giveaway" and said the state should get back any money it puts into the fund. "Normally an investor gets their principal back. This is like investing with an investment banker and having him keep your principal and only give you your profit back," Grothman said.

Actually, it would be like having the banker keep your principal - and three-quarters of the money it earns. You would receive just 25% of the profit on the money you gave away.

But Democrats aren't about to be talked out of emphizing just how bad this deal was:

Ziegelbauer says "There's a lot of crony capitalism in these things, and this one is the height of it," he said.

The current legislation mirrors a proposal introduced by Former state Sen. Ted Kanavas in 2003. "It was the fastest moving model that was out there," Kanavas said.


"I just think there are concerns. People probably have questions," said Rep. Mary Williams (R-Medford), who chairs the committee. "It's better to be cautious. I just really think this is something very big."