An amazing thing happened just as PolitiFact gave Scott Walker a "Pants on Fire" rating for saying the changes to the Wisconsin Idea were just a "drafting error."

Republicans have their lackey: In January of 2014, it was no accident Ray Cross was overwhelmingly endorsed by Scott Walker and the Republican legislatures UW attack dogs as the UW president . It seemed odd at the time and a little foreboding:


Within minutes of the announcement that Cross got the job, state lawmakers began issuing statements praising the selection. Gov. Scott Walker said he had enjoyed working with Cross in his chancellor role.

Rep. Steve Nass (R-Whitewater), chairman of the Assembly Colleges and Universities Committee, said "I trust Ray Cross and believe he offers the right leadership at a critical time in the history of the UW System.

Last week, GOP leader Rep. John Nygren (R-Marinette) endorsed Cross stating Cross would "go a long way in restoring trust and communication that has been lost between the state Legislature and the UW System."

On Upfront with Mike Gousha , Cross embarrassingly provided cover for Walker's blatant and constantly shifting lie. See if this doesn't remind you of a hostage video: 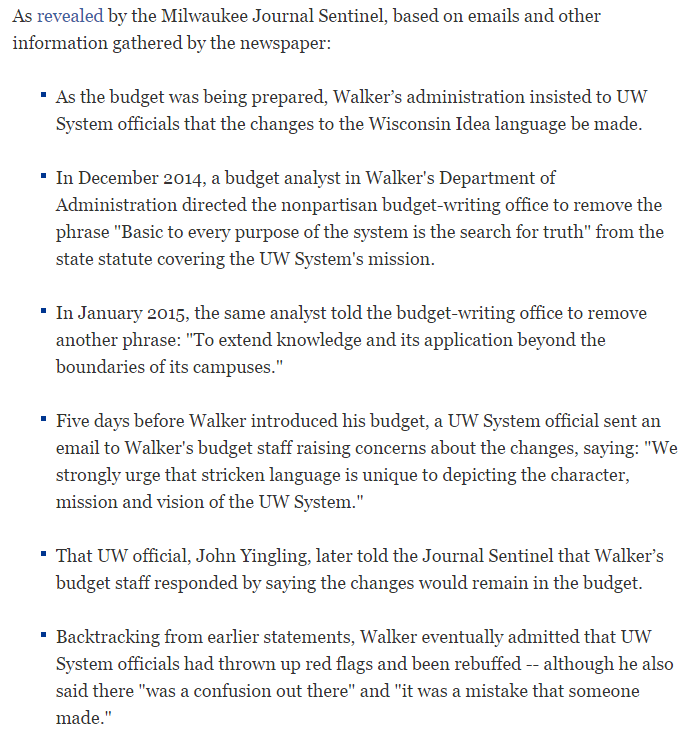 Our rating: Walker said fundamental changes to the language describing the Wisconsin Idea in the University of Wisconsin System's mission statement were the result of a "drafting error" in his state budget proposal.

But Walker’s administration had insisted to UW System officials on making the changes, giving detailed instructions on passages to be removed from state law. And eventually Walker himself acknowledged that the UW System had objected to the changes before his budget was put into final form.

His original claim was not only inaccurate, but ridiculous. Pants on Fire.