This is getting pathetic, no really, it is.

The "Blame Bush" Hypocrites: For years Republicans have been rolling their eyes when Democrats criticize the Bush and GOP policies, ending in the "free market" deregulation catastrophe; the Great Recession. But when it comes to erroneously blaming Democrats, like former governor Jim Doyle, well, they just can't stop themselves.

The most egregious offender, Scott Walker. Walker won all three elections blaming Jim Doyle for actually causing the Great recession, and in turn, the job and business losses. He's still at it.

Here's the latest con; Doyle and the Democratic legislature had to borrow heavily at the peak of the Great Recession to stimulate job growth and development.

Yet during these times of national growth, and because Walker will never raise taxes, he's decided to "spend & borrow," and minimize the debt by comparing it to Doyle. As PolitiFact points out:


Consider that in 2009, Doyle stood where Walker stood and unveiled a two-year budget with a proposed $1.5 billion in borrowing. That’s actually a bit less than what Walker wants ($1.6 billion).

As is typical later in the budget process, the State Building Commission brought forth a capital budget to borrow for building construction on the University of Wisconsin campuses and elsewhere. It sought another $1.2 billion in new bonding above Doyle’s original proposal. Then the Legislature added in another $900 million and -- in the end -- Doyle signed off.

Walker’s comparing his early-stage proposal to a 2009 final enacted budget after lawmakers and Doyle pumped it up. 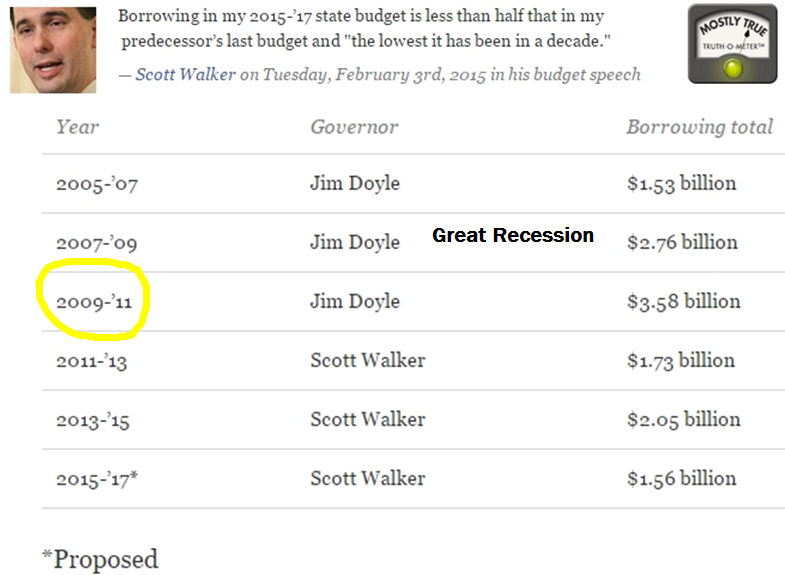