It was almost surreal.

Today's Washington Post column by conservative Kathleen Parker seemed to suggest that much of right wing media talk is nothing but a collection of mindless garbage, and Gov. Scott Walker was trying to rise above it. Silly, but an interesting idea.

Which brings me to Buzzfeed's "How Scott Walker thinks about the Media."

Wisconsin’s governor understands how the media works, as he illustrates in a new book, End of Discussion: How the Left’s Outrage Industry Shuts Down Debate, Manipulates Voters, and Makes America Less Free (and Fun!), by Fox News contributors and long-time conservative writers, Guy Benson and Mary Katharine Ham.

These two right wing shills offer up the perfect example of projection:


"...expose how the Left exploits fake outrage to silence their political opponents--in public, on social media, at work, and even in their own homes."

Can they be so unaware of their own mean spirited schemes? So Walker offered up his own scheme against the tens of thousands of protesters who were all I assume "exploiting fake outrage" around the state Capitol: 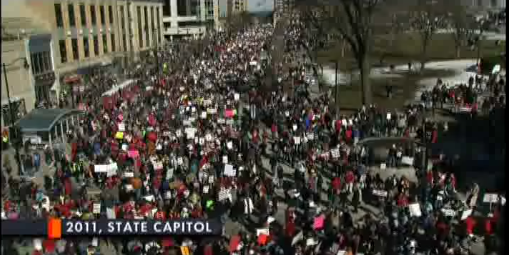 “At the height of the [anti-budget] union protests, when we were approaching 100,000 protesters at and around the Capitol, I finally got wise,” Walker tells Ham and Benson in an interview for the book. “I started holding press conferences at 5:00 because I knew that if I kept it concise, local television and some national outlets would cover it live. So I had an unfiltered way to talk to the state for about 10 minutes.”

“On one particular day, they were louder than they’d ever been, and a reporter asked me if those people had a right to be heard. And I said that they had every right to be heard, but that I wasn't going to let tens of thousands of people — and some were bused and flown in from other states — drown out the voices of millions of people around Wisconsin who elected me to do exactly what I was doing.”

So much for protecting the minority. Walker is currently raising campaign cash vilifying and belittling the 4th estate - the press - an important move if he wants to take complete dictatorial control in 2016:

“To me, this is a classic example of why people hate Washington and, increasingly, they dislike the press,” he said. “The things they care about don’t even remotely come close to what you’re asking about.”

Walker is bashing conservative base voters, who live and breathe this stuff. See the picture of topics to the right.

Conservative radio host Vicki McKenna is one of the few talkers feeding her Facebook page with every possible right wing outrage. It also contradicts Walker’s latest con that Republicans don't care about this stuff:

After being asked whether he believed President Obama is a Christian. “I’ve never asked him that,” Walker told the Washington Post. “You’ve asked me to make statements about people that I haven’t had a conversation with about that. How [could] I say if I know either of you are a Christian?” But inside that analysis, Walker also said he did not know whether the president is a Christian

Conservative columnist Kathleen Parker of the Washington Post had a great response:

Labels: Blame the Media, Scott Walker for President
Email ThisBlogThis!Share to TwitterShare to FacebookShare to Pinterest