The reason behind Walker's methodical attack on all things Liberal, from Unions to the UW.

The latest news about Scott Walker's big UW defunding debacle now contradicts what he said earlier that it was just a blunder. It wasn't, his office requested the UW mission statement changes. 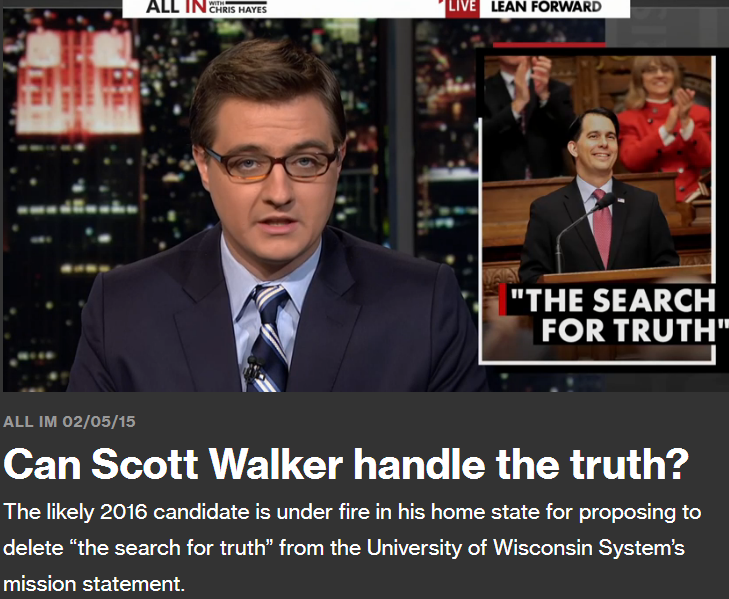 Walker proposed removing the Wisconsin Idea from UW's mission statement, then backtracked and said Thursday that it was a simple mistake that's being blown out of proportion.

MSNBC's Chris Hayes added his insights, noting Walker's strategy to go after and weaken his opponents; first attacking Democratic supporting public unions, and now that bastion of liberalism, the UW.  Joining Hayes was PR Watch's Lisa Graves, who fleshed out the details and added so much more for curious voters across the country:

Walker caught in another big lie: Here's the latest from the jsonline:


Gov. Scott Walker and aides scrambled Thursday to respond to revelations that his administration had insisted to University of Wisconsin officials on scrapping the Wisconsin Idea, the guiding principle for the state's universities for more than a century.

In a rapid revision to his own comments on Wednesday, the Republican governor acknowledged that UW System officials had raised objections about the proposal.

They had been told the changes were not open to debate.