Republican don't want to waste money helping the poor! That was the answer on an assignment in a West Allis school. Too political? One mom thinks so, and she's getting major national coverage whining about it.

But wait, does anyone remember how a conservative teacher brainwashed his students in 2012?


Democurmudgeon: And how does a teacher rate to bring in dumb Ron Johnson, or Rep. Thomas Petri? How does a teacher plan field trips to GOP presidential debates and the Faith and Freedom Coalition Forum of zealot religious right wingers, with students from his class? 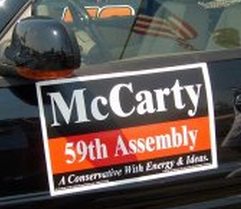 FDLReporter: Karl McCarty, who teaches history and political science at Oakfield High School, invites politicians to speak with his class as a way to show students that politicians are human. Recently, the class hosted U.S. Rep. Thomas Petri (and) Ron Johnson who said any of the GOP candidates would be better than President Barack Obama … “That (hope and change) was an empty vessel filled by the people that voted for him — their hopes and dreams,” Johnson said. jsonline: Call this story Oakfield High School's Excellent Republican Adventure. In a whirlwind trip to Iowa, seven students and two recent graduates of the school, shepherded by teacher Karl McCarty and a father of two in the group, drove six hours from Oakfield to Des Moines, met top GOP candidates.

Where was the outrage? Republicans were silent back then. But now....


A suburban high school government class assignment aimed at helping students figure out which beliefs align with certain political ideologies has come under fire. A Nathan Hale High School mother took her concerns over a recent class assignment public after a teacher graded her son as incorrect for assessing the statement, "We should not help the poor, it's a waste of money," as fascist, instead of what the teacher marked as the correct answer: conservative/Republican.

It’s true isn't it? Who wants to drug test shiftless freeloaders who don’t show up for work? Who wants to cut the poor off from Medicaid or kill ObamaCare? They care alright. Who didn't want to waste money on food stamps in the farm bill? Who won't want to increase the minimum wage? The correct answer is: Conservative/Republican, and they don’t like the truth. 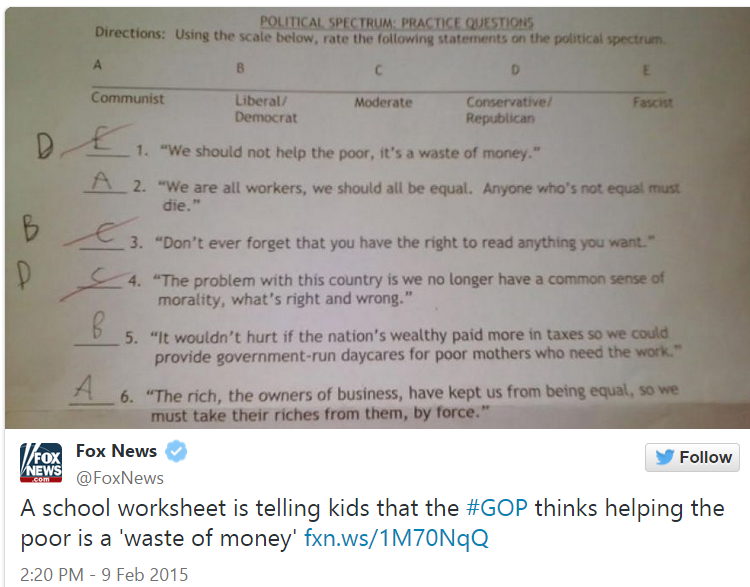 The issue was brought to light by conservative news outlet EAGNews.org and then Fox News. Heather Bronnson posted the EAGNews story on social media Monday, adding the comment, "No political party espouses not helping the poor, it's ridiculous. Why can't they just teach the basic political spectrum without lying?" Bronnson's postings elsewhere are critical of unions.

A West Allis-West Milwaukee School District spokesman said Tuesday the political spectrum assignment was developed by teachers at the high school and has been used for about a decade.

But West Allis wasn't having any of this phony outrage:

A West Allis-West Milwaukee School District spokesman Brian Vissers said the issue had been fueled by EAG, a media group with an anti-public education agenda.


"There are all types of questions on this assignment ranging from far right to far left," he said. "It seems like the mother in this case just pulled out what her political views are. She didn't have any issues with the articles or questions on the other side of the political spectrum."