Who would have thought Scott Walker's tired old speech, with a little injected energy, could result in something like this; 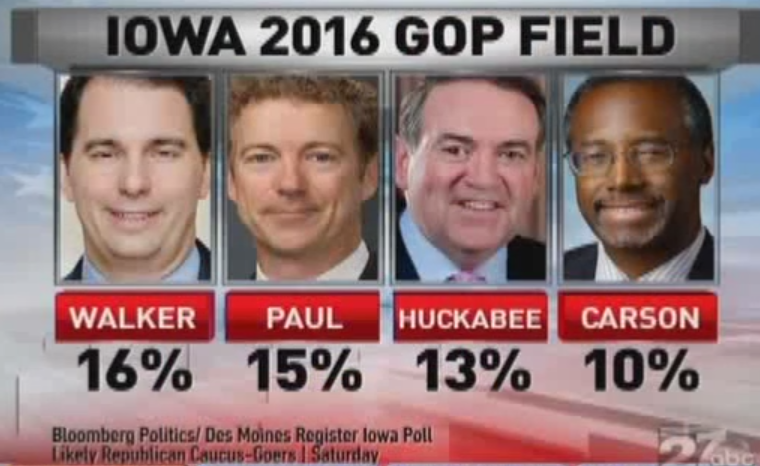 ABC/This Week's Martha Raddatz stopped Scott Walker from "going back" to Obama's "red line," pressing him to "go forward" and explain what his "big bold idea" in Syria would be:

Ironically, Walker represents more of a rerun of the Bush/Cheney years than Jeb Bush himself. Walker's calm detached demeanor is almost scary in light of taking the nation back to the Bush and preemptive wars, a failed foreign policy that ended tens of thousands of American and Iraqi lives. The cost of treating physically and mentally injured veterans will continue for 50 to 60 years, and opened the door to ISIS and other terrorist groups seeking power:

RADDATZ: Let's not go back. Let's go forward. What is your big, bold idea in Syria?

WALKER: I think aggressively, we need to take the fight to ISIS and any other radical Islamic terrorist in and around the world, because it's not a matter of when they attempt an attack on American soil, or not if I should say, it's when, and we need leadership that says clearly, not only amongst the United States but amongst our allies, that we're willing to take appropriate action. I think it should be surgical.

RADDATZ: You don't think 2,000 air strikes is taking it to ISIS in Syria and Iraq?

WALKER: I think we need to have an aggressive strategy anywhere around the world. I think it's a mistake to -

WALKER: I think anywhere and everywhere, we have to be - go beyond just aggressive air strikes. We have to look at other surgical methods. And ultimately, we have to be prepared to put boots on the ground if that's what it takes, because I think, you know--

WALKER: I don't think that is an immediate plan, but I think anywhere in the world--

RADDATZ: But you would not rule that out.

WALKER: I wouldn't rule anything out.

One more thing. Matthew Dowd said what the lazy press will be saying till the next election, and it's a major sticking point with me; what about Walker's actual record?

Republican governors have failed miserably, worse than their Democratic counterparts, and yet the media doesn't seem to care.