Dumb Ron Johnson liked High Deductible HSA's before he was against them in ObamaCare.

Republican backed high deductible health savings accounts (HSA) were always a bad idea. Deductibles from $4,000 to $12,000 are now the norm. I know this because I had about 3 different versions in the individual market. Not only did I not have the deductible in an account, I gambled I wouldn't have to use it. 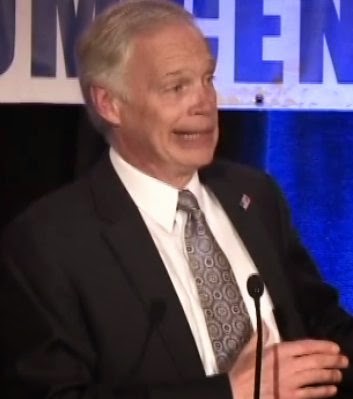 Now, according to Dumb Ron Johnson, high deductible plans are horrible and unaffordable because they’re a part of the Affordable Care Act.

Johnson even bragged that he provided high deductible Health Savings Accounts to his employees. Skin in the game. His logic at the time:


The U.S. should rip up the recently passed health reform law and emphasize free-market principles such as health savings accounts and out-of-pocket charges for as big a chunk of the country's medical care as possible, Johnson said. "You also then remove the insurance third party in the first $2,000, $3,000, $4,000 or $5000 of everybody's health care spending every year," Johnson said. Johnson credits health savings accounts for pushing consumers to get more attuned to the real cost of care.

It was usually way above $5,000 too, but I digress. Now imagine the laugh I got when I saw this Dumb Ron Johnson tweet from last October:

They were always unaffordable. You're getting it now, after it's too late?


Extra: Johnson once said this about ObamaCare:

"I don't want to see the finest health-care system in the world that saved my daughter's life destroyed. And that's what we are moving toward."

His opposition to the law was the centerpiece of his 2010 campaign in which he often brought up the life-saving heart surgery his daughter, Carey, underwent as an infant.

The surgeon who performed the operation, John Foker, told the left-leaning blog Uppity Wisconsin that he was "generally supportive" of Obamacare … Foker, who teaches at the University of Minnesota Medical School, told the Journal Sentinel: "I'm generally supportive of having this country provide health insurance to its citizens so people aren't bankrupted having to go to the hospital. Health care should be considered a right, and we should figure out how to pay for it," Foker added.

Think that might have made Ron Johnson rethink his position?

Johnson said: "I have nothing but wonderful feelings about Dr. Foker. I love the man. He saved my daughter's life. I'm trying to save a health care system."