Walker says Faith and Science Compatible, maybe even in our classroom.

This is not an innocent Scott Walker tweet, it's dog whistle messaging missed by the media:

Walker is equating faith with science, that they're compatible in some way, "hand in hand" stuff...in our classrooms. This has been the argument for including intelligent design in our science classes. It presents both theories as equals, when only one can be tested, not just "debated." From the Discovery Institute comes this ridiculous rationalization that tries to get around that with twisted logic that inserts testing and experimentation into intelligent design to simply elicit a broad "God designed it" opinion. 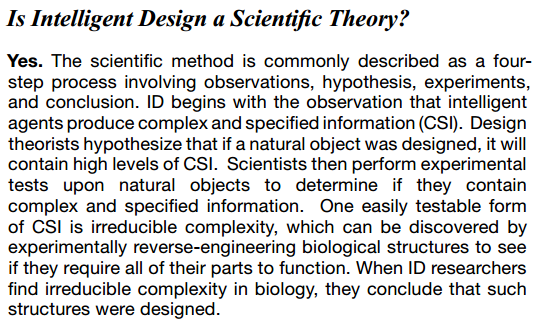 It's no accident vouchers are going mainly to religious schools that can deny evolution completely in classrooms and online. Taxpayer money will eventually fund a much larger part of an American society that thinks men rode on dinosaurs.

You can't test faith either, or it won't be...faith anymore, right?