A Republican target for years, the University of Wisconsin got its walking papers from the nations anti-education leader Scott Walker.

Just to make sure the UW didn't try any funny stuff or take itself to seriously, Walker made this treasured state institution sound like a motivational seminar: 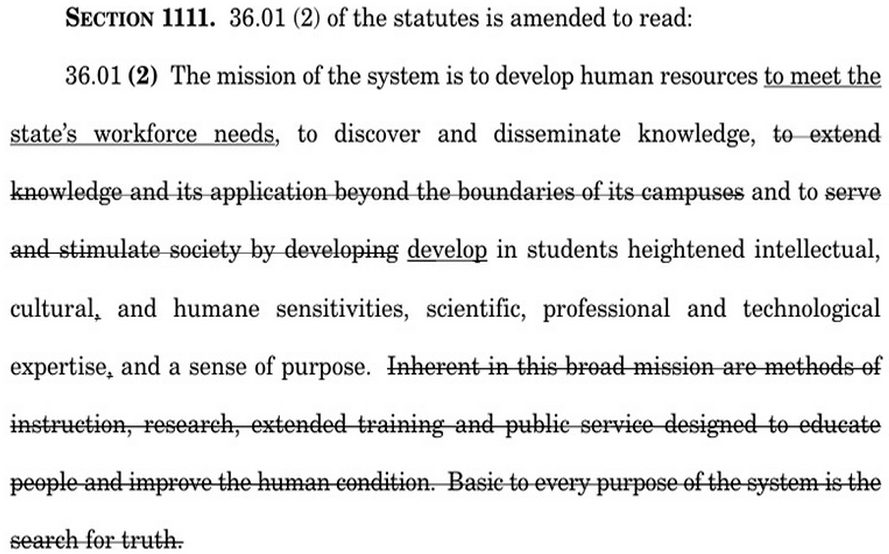 Walker tried to back away from his untimely blunder by claiming it was a "drafting error"...really, that oddly selected just the right grouping of words gutting the "Wisconsin Idea." According Fox 6, earlier in the day, Walker had no problem with the "drafting error." Gee, what changed?


PRWatch: Wisconsin Governor Scott Walker struck "the search for truth" and the Wisconsin Idea from the university's mission in his executive budget bill unveiled last night.

First summed up by UW President Charles Van Hise in 1904, the Wisconsin Idea means that "the borders of the University are the borders of the state." Van Hise declared that he would “never be content until the beneficent influence of the university reaches every family in the state” and this has long been the core philosophy of the UW System, which has worked hard over the decades to generate programs that serve people and communities all over the state.

Walker is on tape endorsing the change on a Wednesday stop in DePere:

Update from jsonline: I came across one of Walker's clueless comments, along with important UW faculty reactions:


Walker said: "Learning's important, but ultimately it's most important for people to get the chance to get the education that they need to succeed in the workforce and in life."

"I'm nearly speechless," said Mark Schwartz, a UW-Milwaukee distinguished professor geography and chairman of the faculty University Committee. "The budget cuts are one thing. This aims at the heart of the Wisconsin Idea and smashes it."

"It's a very materialistic definition of knowledge that's very off-putting to me," said James Baughman, a historian and Fetzer-Bascom professor at UW-Madison's School of Journalism and Mass Communication. "We aren't just training people to be workers," Baughman said. "We're training them to be citizens, to be leaders. It's not that we don't have a responsibility to serve people to get training, but it's a lot more than that."