Scott Walker: The Dumbing Down of America's Poster Boy!!! Wisconsin's so proud.

It's never a good sign when your own governor and - yikes - candidate for president, is the poster boy for the current anti-education movement within the Republican Party. Even "stand with Walker" idol worshipers, with their own families to worry about, can't be happy with the downward direction their party is taking on education. College nowadays is as standard as having a high school diploma. That scares Republicans, who have for years believed universities brainwash students with liberal socialist ideas. It's time to block the school house doors again, but this time, to everyone. Salon: 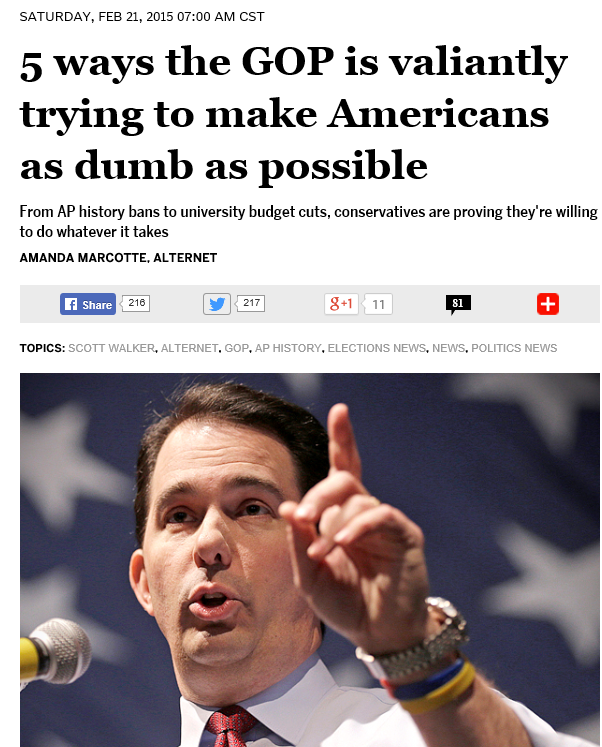 If you ever want to make a conservative touchy, the quickest way is to hint that the connection between ignorance and holding right-wing views is more than a coincidence. But when you look at what Republican politicians are up to these days, especially in state legislatures, it starts to look like Republicans are purposefully trying to make Americans more ignorant. Here are 5 recent examples.

1) Oklahoma is about to ban AP history classes. Under the guise of “emergency” legislation, the education committee in the Oklahoma legislature had an 11-4 vote to advance a bill that would ban the advanced placement history curriculum from Oklahoma schools. There’s not even a real attempt here, as with other conservative assaults on education, to hide that the goal is to keep students ignorant so that they are more susceptible to right wing propaganda. The bill’s sponsor, state representative Dan Fisher, argued that the schools should be teaching “American exceptionalism,” and avoiding teaching parts of American history that are less than flattering. The Republican National Committee has endorsed the idea that AP history courses should teach less strife and present a more rah-rah view of American history. In Colorado, attempts to whitewash the history classes even resulted in student walkouts, garnering national attention.

2) Scott Walker has it out for the University of Wisconsin. Walker … not caring that it’s the state’s pride and joy … The goal is to slash a whopping $300 million from the University of Wisconsin system over the next two years … Walker and his staff haven’t really taken many pains to hide that this is rooted in a deeper hostility to the very idea of knowledge itself. “…his staff proposed changing the university’s ethereal focus on the pursuit of truth, known as the ‘Wisconsin Idea,’ to a grittier focus on ‘workforce needs,’” reports the Washington Post. Walker backed off recasting higher education as nothing more than job training … but the fact that this wording change was proposed at all shows that the hostility to education is ideological and has little to nothing to do with saving money.

3) Redefining education as “welfare” Mississippi state representative Gene Alday made national headlines recently … “I come from a town where all the blacks are getting food stamps and what I call ‘welfare crazy checks.’ Alday went on his rant in part because he was trying to justify his opposition to increased funding for elementary school education. Alday’s little racist spiel was an attempt to insinuate that teaching kids reading and writing amounts to “welfare” and to suggest that education is wasted on black people in particular.

4) Threatening to arrest teachers for sex education. In Kansas, Republicans are no longer satisfied with laws requiring teachers to pretend that it’s normal and expected for people to wait until marriage to have sex. Now there’s growing support for having teachers fear jail time should they ever hint, during sex education, that sex is a thing people do for pleasure. Using a teacher who had a poster up in class that suggested—gasp!—that sex is sometimes used to show affection, Republicans in the state are sponsoring a bill that would allow officials to criminally charge teachers for daring to acknowledge such a thing ever again.

5) Continued demands that science education be replaced with magic … creationists haven’t gone anywhere. In South Dakota, Republicans once again pushed for a bill that would “allow” teachers to “question” evolution in the classroom, which is a fancy way of saying that teachers would be permitted to treat being ignorant as the equivalent of being educated. Asked recently about evolution, Gov. Scott Walker stuck to the narrative that elevates ignorance over education, saying, “That’s a question politicians shouldn’t be involved in one way or another. I am going to leave that up to you.” The comment was the exaltation of ignorance over education. Evolutionary theory is a knowable thing. Walker epitomized the new conservative mentality of ignorance uber alles.