"Right-to-work" for less fast-tracked, Walker's Big Government inserts itself into the private sector.

The big not so surprising move by the Republican legislature authority to pass a right-to-work law, inserting government into the private sector, is now getting a big thumbs up from our incidental governor. After right wing low information candidate Duey Stroebel won his primary, with no Democratic opponent, the senate is now confident it can pass right-to-work: 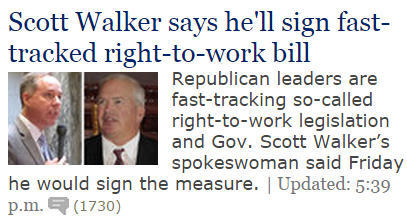 WKOW: In a surprise announcement Friday morning, Republican Senate Majority Leader Scott Fitzgerald told WTMJ radio he has 17 votes to pass the bill now. He says it will be introduced later in the day and he plans to hold a vote either Wednesday or Thursday.

It's a fire sale: Starving public schools funding, cutting off our public colleges and freeing taxpayers from the burden of owning their own state parks, Walker is leaving government in the control of special interests. All that for a $5 property tax cut savings and bad budgeting. Not even private businesses are exempt from Walker's intrusive oversight:

And today, after so many non-answers about his support of right-to-work?


"I've never said that I didn't think it was a good idea. I've just questioned the timing in the past and whether it was right at that time," Walker told the Milwaukee Journal Sentinel in a Friday

Remember, Walker's austerity small government vision can't fail, because there's always something else to throw overboard as revenues sink. In the words of Sen. Alberta Darling:

Labels: Right to Work, Scott Walker for President
Email ThisBlogThis!Share to TwitterShare to FacebookShare to Pinterest