Dumb Ron Johnson Surprised: ‘What, the law applies to me too?’

Federal Election law is very clear about disclosing what our elected politicians spend their money on, like Johnson’s ridiculously vindictive lawsuit against the Affordable Care Act. He’s spending money alright, but isn't disclosing the amount or estimating the cost, which is what he's legally requirement to do. Simple.

Now, tell me if the law is too confusing: 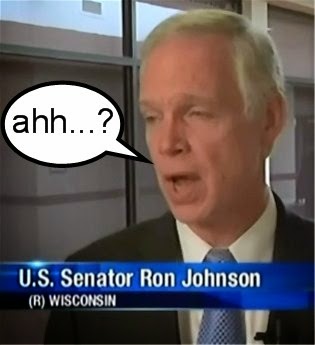 FEC finance law says a “written agreement to make an expenditure, such as a media contract, constitutes an expenditure … (if) the exact amount of a debt is not known, the committee reports an estimated amount,” which it can amend once the correct amount is known.

Pretty clear right? Not to Dumb Ron Johnson or his attorney Rick Esenberg, who said, “It’s a contrived and fabricated controversy.”

That would be true if Dumb Ron Johnson were exempt from all U.S. laws. I’m assuming he thinks he is. Here's what went down:


WSJ: One Wisconsin Now (OWN) filed a complaint earlier this week with the Federal Election Commission accusing Johnson of improperly failing to disclose legal fees linked to his lawsuit against the Affordable Care Act, known as Obamacare. In early January, Johnson sued over Obamacare, saying he objected to exemptions for Congress and special treatment for federal lawmakers and their staff members, among other issues. And Johnson spokeswoman Melinda Schnell said the campaign will pay any legal costs once billed.

So Johnson said the costs will be reported once they’re known. But that’s very illegal, yet...:


“The Johnson campaign has not violated the intent or letter of FEC regulations on this matter and is confident the FEC will rule accordingly,” she said.

But Scot Ross, executive director of OWN, argued that Johnson has signed a retainer agreement with the Wisconsin Institute for Law and Liberty and attorney Rick Esenberg, and as a result his campaign is required to report at least an estimated amount, which it could amend when the actual amount is known.

And Esenberg's upside down response, “It’s a contrived and fabricated controversy.”

For a guy suing to uphold the law, this is an amazingly odd justification, one he's willing to spend money on fighting. Let's hope he reports this expenditure too...
Posted by John Peterson, Democurmudgeon at 5/17/2014 10:56:00 AM