Let me get this right: Mary Burke cannot vote to support union negotiations, repealing collective bargaining rights, and cannot appeal to her base without destroying her political career.

Have I got that right?

But it is perfectly alright for a man like Scott Walker to not just support Act 10, but fight for voter ID, and be receptive to right-to-work legislation that would definitely appeal to his tea party base? No big media deal there.

This total collapse of the media and its in-the-tank approach to the Republican Party agenda is stunning, and explains why so many misstatements by Scott Walker have gone uncorrected. So much for an informed public. Heck, let PolitiFact do the hard investigative work, whenever they get around to it.

See for yourself from this Wisconsin State Journal headline: 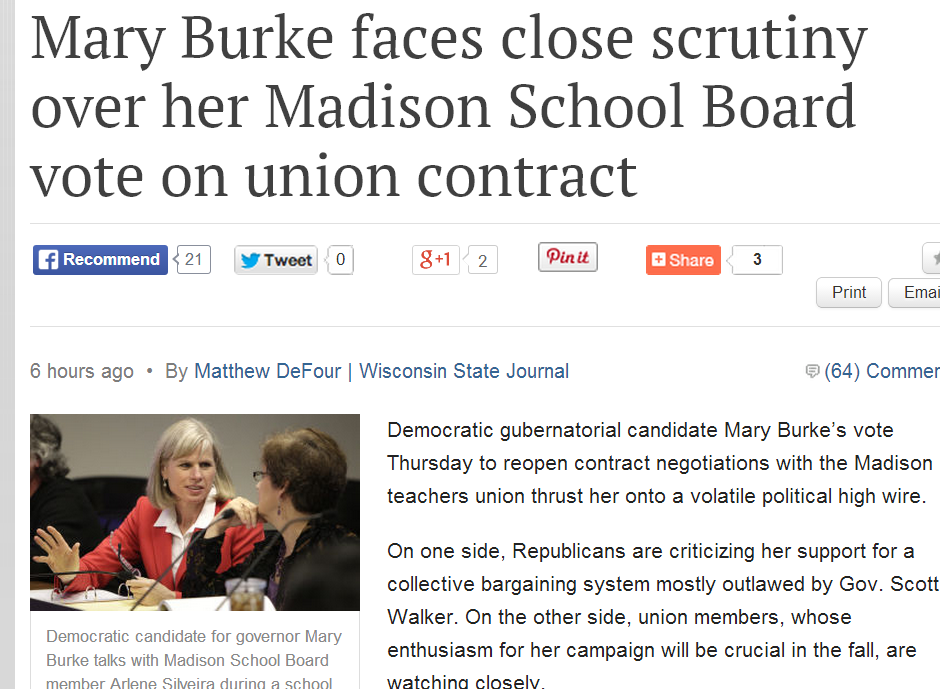 We must watch Burke very closely, just in case she stumbles, or even tries to get the votes of her party. Double standard much? Guess so.

The school board believes it can negotiate with the union:


"...lower court rulings to reach contracts with their public employers. Those contracts extend the unions' bargaining authority to reach deals on issues such as vacations and benefits and the ability to collect mandatory payments from employees as long as the legal agreements last, since typically not even laws can break contracts ... the Madison School Board has extended the MTI union contract three times.

Of course transparently right wing organizations trying to privatize education so they make a boat load of money off our kids, like the Bradly Foundation, will spend whatever it takes to litigate and delay opposition, whether its a school board, union or the simple vote of board member and candidate Mary Burke. How dare she...!


State GOP executive director Joe Fadness called Burke's vote a "payoff" to Madison Teachers and other unions that endorsed her."

Of course Walker didn't payoff corporate donors, or appeal to his base with Act 10, rejecting high speed rail, supported an unconstitutional law requiring voter ID, rammed through lose mining regulations, trashed Common Core...etc. No payoff there. Outside billionaire campaign funding is just an odd coincidence the media is tired of covering.