Check out the great article in the Wisconsin State Journal showing the impact of Scott Walker's scattershot tax cut policy and tax shift to the middleclass. That's not an editorial opinion, it's shown in the graphs below. But more surprising is the measured and common sense approach finally articulated by candidate Mary Burke.

Gov. Scott Walker floated a radical and controversial idea for Wisconsin; eliminate the state income tax. So far Walker has cut taxes by nearly $2 billion over his first term, according to the nonpartisan Legislative Fiscal Bureau. Walker’s 48 tax cuts; income tax rate reductions, additional aid to K-12 schools and technical colleges that drives down property taxes, and deductions, exemptions and credits targeted at boosting businesses. Walker … says he will lower the tax burden each year in office … but rejected the possibility of raising the sales tax to make up the lost revenue.

Democratic challenger Mary Burke says major tax reform isn't needed … Walker’s cuts have been based on a premise; lower taxes across the board will attract businesses, create jobs and facilitate further tax rate reductions, that some economists, researchers and Burke dispute.

Best line of the article (first highlight) and best criticism of Walker’s mess:

“Walker does believe in this trickle down. I don’t, and that comes from a business perspective,” Burke said. “I haven’t seen a lot in his plan that indicates how he’s going to grow the economy other than thinking it grows because you reduce taxes.” Burke said she favors more targeted cuts for the middle class and business startups over broad cuts that benefit the wealthy and companies that aren't adding new jobs.

She has called for raising the college tuition income tax deduction from $6,943 to $10,424, pledged to repeal a new private school tuition deduction expected to cost $30 million a year, and said she’s skeptical that the manufacturing and agricultural credit, which will soon cost $128.7 million a year, will create jobs. “Gov. Walker has created loopholes that carve out special deals, which means while some people are paying their fair share, others are not,” Burke said. “I will look at these loopholes and eliminate those that benefit only special interests.”

Click the chart (to enlarge), with 4 different tax change possibilities, and the impact (in red) on the state’s budget. Keep in mind, Walker admitted above that his “no tax” pledge to lobbyist Grover Norquist prevents him from ever raising the sales tax (but he did break that promise on the EITC & Homestead Credit): 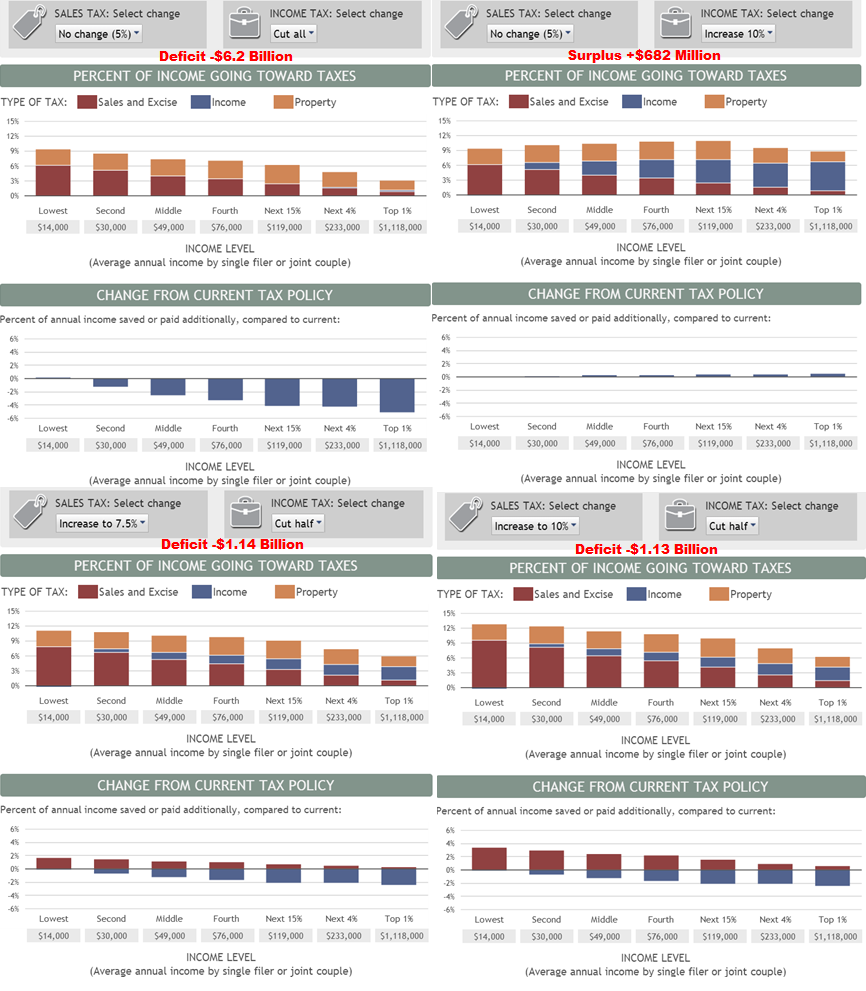 Do cuts create jobs? Mike Leachman, director of state research at the liberal-leaning Center on Budget and Policy Priorities said past studies showing states that enacted large income tax cuts in the 1990s and 2000s had a mixed record on economic growth. Several tax-cutting states performed worse than those with higher taxes, and those that performed better were oil producers … cutting income taxes doesn’t spur major economic growth because they’re usually accompanied by reductions in government services. “You’re taking money from the pockets of teachers and other public employees and companies that contract with the government,” he said. “That money also gets out into the economy. On balance, it’s more or less a wash.”

Homestead Credit and Earned Income Tax Credit have eroded. Walker reduced the EITC for families with two or more children and repealed indexing provisions for the Homestead Credit, saving the state $169.6 million during his first term.