Janesville Embarrassment!! Giving bigots a voice in our classrooms the real controversy.

At the same time states are having their bigoted gay marriage bans overturned for being unconstitutional, the Janesville School District is apologizing for not giving bigots a voice in their classrooms. In an indirect way, they did just that:

WSJ: The Janesville School District superintendent issued a public apology Tuesday for the showing of a video that she describes as pro-gay marriage and in violation of district policies requiring the presentation of all sides of “controversial” or “political” topics.

It’s only controversial to bigots, who found a way to inject their sick politics into the mix. It’s a constitutional protection for the rest of us. Apologize...? Nice lesson to teach our kids.

What got little attention was this important detail; the students chose the video, a positive message of equal rights and a look at the LGBT struggle in the words of our kids. So this is what conservative are talking about when they want to develop their own "local" curriculum?

…16-minute video of children reacting to marriage proposals between same-sex couples and sharing their thoughts on issues like gay marriage bans or whether they would stay friends with someone who told them they were gay. Bits of text flashed during the video offering viewers information about the history and status of gay marriage in the United States or about discrimination and hate crimes, among other things.


That struggle presented “both sides.” But Janesville felt obligated to apologize to just a few bigoted parents hell bent on holding onto their prejudices and politicizing the whole event as "propaganda."

So Yungerman thinks its a “left-wing political view.” Who injected politics into the Janesville classroom?

Imagine inviting a guest like Yungerman to discussion the evils of gay marriage. Or imagine this; presenting an opposing opinion over interracial marriage or opposition to ending school segregation back in the 60's? 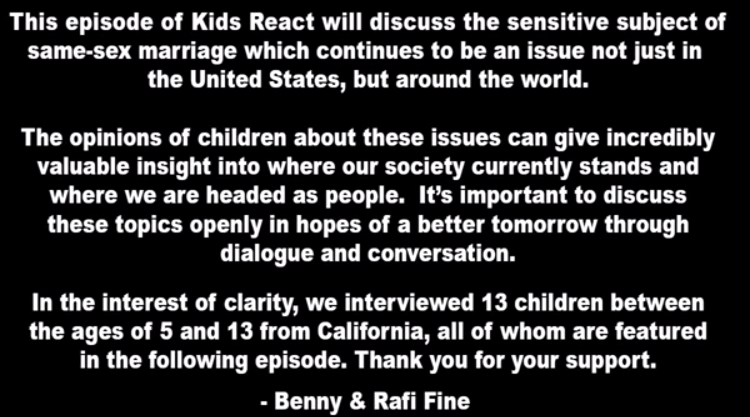 …it did not offer a similar look at views in support of keeping marriage between men and women. The policy requires classroom discussions to include all sides of a political matter. She said she felt “that the concept of gay marriage would fall under political action and/or legislation” because cases are being argued for and against it in courts across the country. The video was played on April 11 to recognize the Day of Silence, a national event to bring “attention to anti-LGBT name-calling, bullying and harassment in schools,” according to the Gay, Lesbian & Straight Education Network. “School staff should encourage, not condemn, the brave efforts of youth in Gay-Straight Alliance clubs to make their schools safer for all students.”

Video creators Benny and Rafi Fine said in an email that they do not consider the video to be biased, and consider “raw opinions of children to be incredibly valuable insight on our current society.” They also said they were surprised to see any need for a public apology over the video.