Conservative Activist Court victories accelerate Walker and Big Business Takeover. "So This Is How Liberty Dies..."


Less than 24 hours after a federal judge halted a probe into conservative groups and the campaign of Gov. Scott Walker, an appeals court blocked that ruling — allowing prosecutors to keep material they have gathered in the case.

The three-judge panel of the 7th Circuit Court of Appeals in Chicago provided a means for U.S. District Rudolph Randa in Milwaukee to reissue his preliminary injunction stopping the investigation, but it said he cannot order prosecutors to destroy evidence they have collected so far … saying he did not have the authority to do that because prosecutors had already appealed an earlier decision in the case. Randa could issue his injunction only if he certified the appeal as frivolous, and he never ruled on that point — though he had recently written he was inclined to believe it is frivolous.

Trash the judges you don't like: And while Republicans complained about a supposed liberal activist judge ruling the voter ID law was unconstitutional, an activist conservative judge was right to decide to shut down the John Doe investigation:

"The Randa ruling is a vindication of what we have been saying all along that the investigation has been much more about a political (motive) than about fact-finding," said Assembly Speaker Robin Vos (R-Rochester).

The bottom line: Here's what this could mean:


"If sustained, this ruling is the death of campaign finance law as we know it in the state of Wisconsin and across the nation," said Samuel Leib, the lawyer representing the prosecutors in the lawsuit. "It will now be possible for a political candidate to personally conduct a campaign — soup to nuts — without disclosing a single campaign contribution."

WSJ: The John Doe prosecutors had filed an emergency request late Monday with the 7th Circuit U.S. Court of Appeals, asking it to block Randa from ruling on Club for Growth’s request for a preliminary injunction. “(Eric O’Keefe and Club for Growth) have asked the district court to preempt lawful state ‘John Doe’ proceedings and exonerate them from any obligation to comply with Wisconsin’s campaign finance rules” … to halt the investigation “would be to destroy evidence of crimes and effectively restrain the state of Wisconsin from enforcement of its laws” … prosecutors considered Club for Growth the “hub” through which Walker’s campaign advisers, R.J. Johnson would coordinate fundraising and issue ads by groups including Citizens for a Strong America, Wisconsin Right to Life and United Sportsmen of Wisconsin. 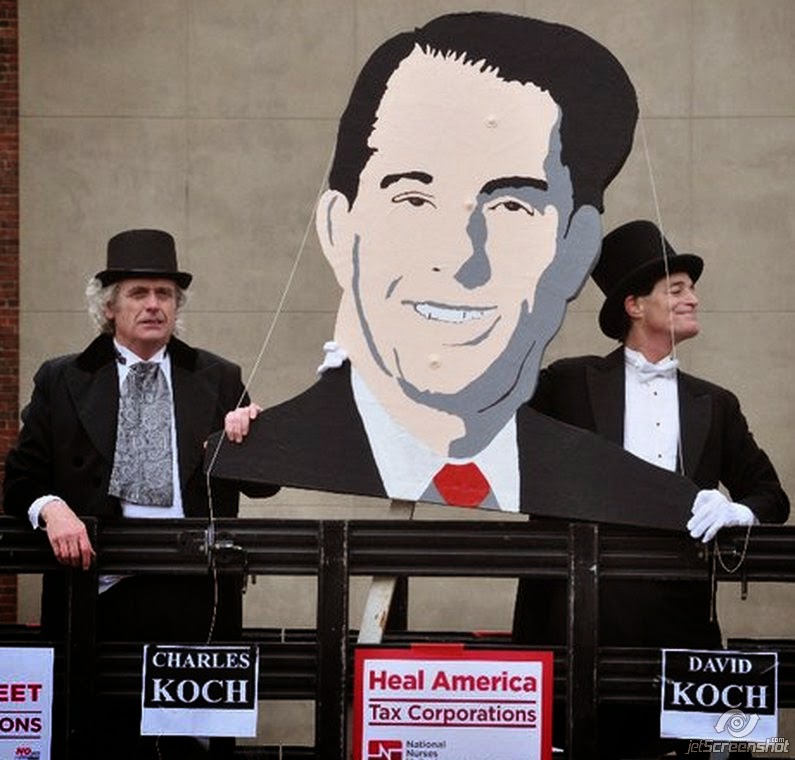 Milwaukee attorney Michael Maistelman said Randa’s ruling could have “long-term repercussions” for the independence of state prosecutors. “For the federal judicial branch to halt an investigation conducted by a constitutionally elected executive (district attorney) is huge,” Maistelman said.

Randa’s order confirmed that one of Walker’s campaign advisers, R.J. Johnson, has been under investigation for allegedly controlling a “hub” of issue-ad groups in 2011 and 2012 in coordination with Friends of Scott Walker. “Even if they were,” Randa wrote, “that does not transform the activity into so-called express advocacy, which is regulated.  O’Keefe and the Club obviously agree with Governor Walker’s policies, but coordinated ads in favor of those policies carry no risk of corruption because the Club’s interests are already aligned with Walker and other conservative politicians,” Randa wrote. “Such (issue) ads are meant to educate the electorate, not curry favor with corruptible candidates.”

The Supreme Court's McCutcheon Decision Fallout: Because the court essentially shot down the idea that money corrupts, we no longer have the ability to justify the John Doe investigation. Randa's comments were mind bending:


jsonline: In his 26-page decision, U.S. District Judge Rudolph Randa in Milwaukee told prosecutors: "The (Wisconsin Club for Growth and its treasurer) have found a way to circumvent campaign finance laws, and that circumvention should not and cannot be condemned or restricted.

"The plaintiffs have been shut out of the political process merely by association with conservative politicians," wrote Randa, who was appointed to the bench in 1992 by President George H.W. Bush.

Judge Randa is worried about the Club for Growth's loss of fundraising time:

He ordered an immediate halt to the investigation, the return of all property seized during it, and the destruction of any information and materials gained in the investigation. He told the Wisconsin Club for Growth it did not need to cooperate with prosecutors in any way. Randa wrote of the urgency of the case. O'Keefe estimates the Wisconsin Club for Growth has lost $2 million in fundraising that would have been committed to issue advocacy, Randa wrote.