Walker saw himself in his Hand Picked Staff, emails reveal.

Scott Walker will insist there's nothing in the emails that could get him arrested, but that doesn't discount the ugly disregard he had for the people he served or the kind of staff he chose that reflected his values. After all, these emails do show us what they talked about behind closed doors, and how they talked about it.

Walker surrounded himself with petty thugs and thieves back then, and still does. So can you imagine Walker putting together a White House staff?

Surprise, Walker didn't expect any media attention. This says so much:

Gov. Scott Walker won't be taking media questions Thursday about the tens of thousands of pages of documents unsealed in a criminal appeal made by a former aide. "The governor doesn't have any media availability ," spokesman Tom Evenson said … he was confident there wouldn't be anything damaging in them beyond what had already led to criminal charges.

Nothing damaging? Really? I suppose Walker still doesn't see anything harmful in the following: 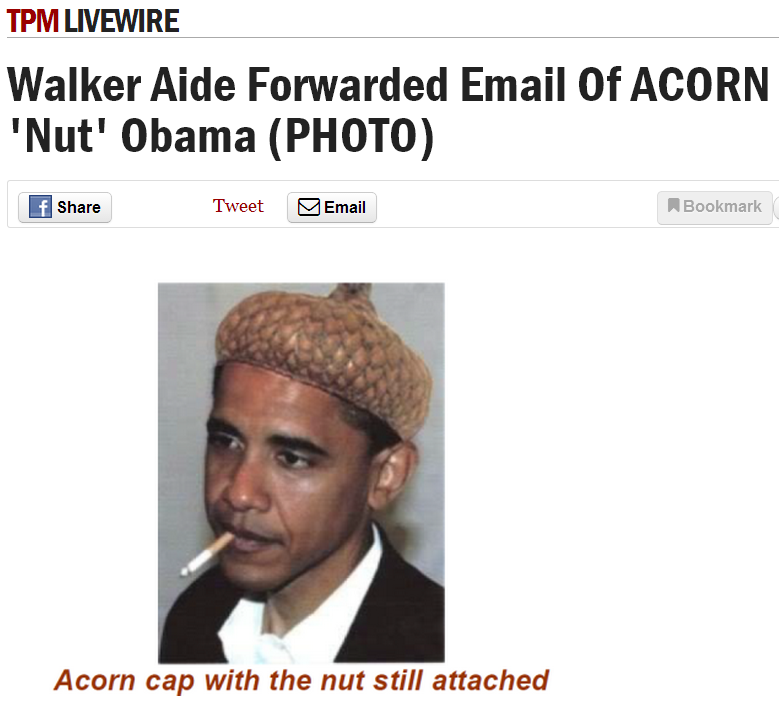 Top aides for Wisconsin Gov. Scott Walker (R) made a habit of forwarding off-color emails. Case in point: one email from former Walker chief of staff Thomas Nardelli featured a photoshopped picture of President Barack Obama with a giant acorn cap for a hat. The text: "New fall hat… Acorn cap with the nut still attached," a clear reference to the Association of Community Organizations for Reform Now (ACORN), which conservatives in Congress defunded in 2009 ... Congress has voted to defund the organization several times after it has folded.

TPM has already noted that Nardelli forwarded a racist and bizarre email where the narrator describes a nightmare of waking up black, gay, drug-addicted, disabled and HIV positive.

How about playing the media, like the Journal Sentinel:


Respect for mental health patients? Not much: Emails show Scott Walker's role in managing mental health complex crisis … (while) running for governor … "We need to continue to keep me out of the story as this is a process issue and not a policy matter,"

And Walker suggested reaching out to Journal Sentinel editorial writers, noting: "The next problem will be editorials and this can nip it in the butt." Rindfliesch wrote … a Journal Sentinel reporter "doesn't get any traction if he can't get anyone to say anything," she said.

Or Walker's contempt for the mentally ill, with staff reactions like this:

Rindfleisch was sarcastic about the Mental Health Complex issue, in a Sept. 2, 2010, "Last week was a nightmare. A bad story every day on our looney bin. Doctors having sex with patients, patients getting knocked up. So, it's been crazy (pun intended.)" … she expected Milwaukee Mayor Tom Barrett to make the issue "the center of his campaign … "Yep," Rindfleisch replied, "No one cares about crazy people."