No Union at VW Plant in Tennessee!!!

Tennessee VW workers sent a clear message to union organizers; "we're southerners and we always vote against our best interest, like before."

Apparently those tough negotiations between management and labor is too nerve-racking for Tennesseans to justify better wages and benefits, especially at a union friendly company? These people are really scary. 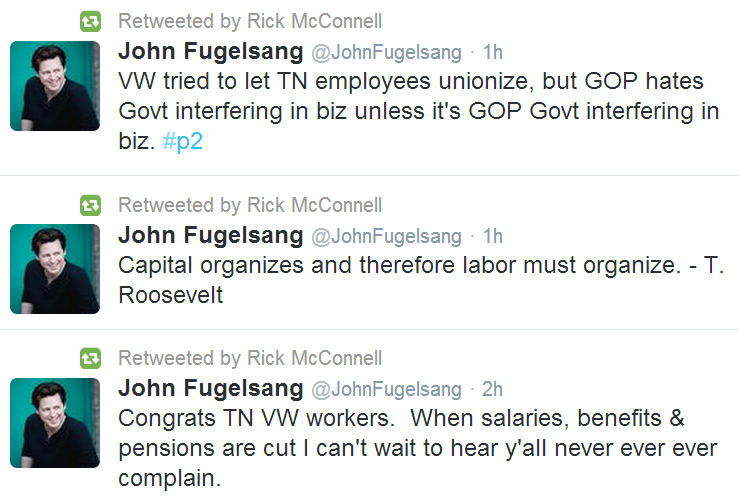 From the Wall Street Journal: The vote was held amid public campaigning against the union by Republican politicians, including Gov. Bill Haslam, and conservative activist groups. Conservative political groups, including one backed by antitax activist Grover Norquist, put up anti-union billboards around Chattanooga. A small but determined group of workers who oppose the UAW also worked to tilt their colleagues against the union, an effort that ultimately proved successful. But more workers were persuaded to vote against the union by the UAW's past of bitter battles with management, costly labor contracts and complex work rules. "If the union comes in, we'll have a divided work force," said Cheryl Hawkins, 44, an assembly line worker with three sons. "It will ruin what we have."

Other UAW opponents said they dislike the union's support of politicians who back causes like abortion rights and gun control that rub against the conservative bent of Southern states like Tennessee. Still others objected to paying dues to a union from Detroit that is aligned with Volkswagen competitors like GM and Ford. "I just don't trust them," said Danielle Brunner, 23, who has worked at the plant for nearly three years and makes about $20 an hour—about $5 an hour more than new hires at GM, Ford and Chrysler plants.

Here's Rachel Maddow's take, starting off with the Scott Walker attack on unions;