The Billionaire takeover of Wisconsin!!! Thank You Scott Walker.

Remember the WISGOP outrage over "millionaire" Mary Burke's entry into the race for governor? 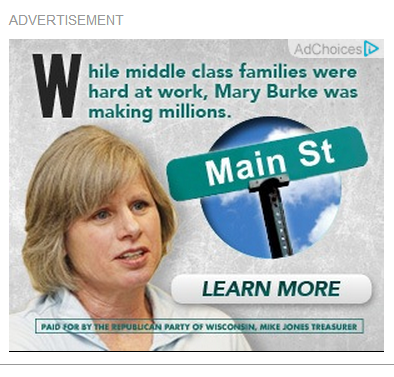 They advertised heavily, like the internet ad to the right. She's so out of touch...right? Wait a minute, suddenly middle class families work harder than millionaires? They're so confused.

And yet this same Republican Party has decided to hinge their entire political existence on "sugar daddy" billionaire donors without feeling just a little hypocritical.

Sadly, Mary Burke is only a millionaire. The GOP has moved beyond that riffraff...where are the billionaires?

In 2013, Wisconsinites didn't notice that all of that out-of-place Scott Walker praise came from out-of-state billionaire supporters. Despite a stagnating economy and trailing jobs growth, things never looked better for some reason. Thank you Scott Walker?

Our groveling governor never even pressed these same corporate CEO's to help him out a little with actual job creation. That's because "demand" creates jobs, not tax cuts.

Walker's pursuit of, and sellout to, billionaire donors is jaw dropping. But it's a party strategy detailed here in the National Journal article. I highlighted our states political beggars: 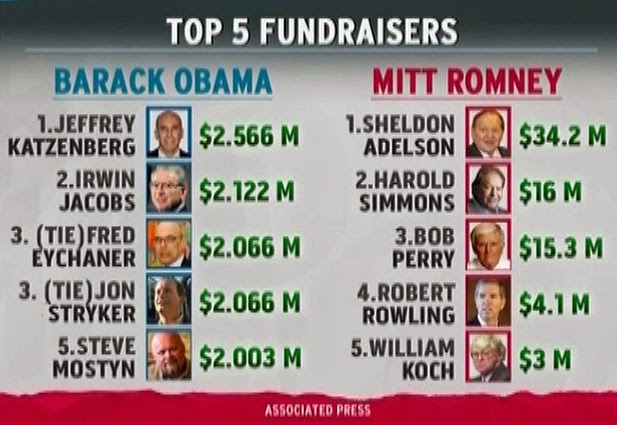 1. The race for a 2016 super-PAC sugar daddy is on. Harlan Crow, the real estate magnate and conservative financier who calls the city home, arrived there fresh from watching the Super Bowl in New Jersey Gov. Chris Christie's private box. On Tuesday, Wisconsin Gov. Scott Walker flew into town for a reelection fundraiser at Crow's $24 million mansion.

2. Mega-donors Sheldon Adelson and Foster Friess propped up the candidacies of Newt Gingrich and Rick Santorum. GOP political fundraisers and strategists said that Walker, Cruz, Paul, and Christie have been among the most active and consistently aggressive in nationwide donor outreach in the last year.

3. The Ricketts family—including Joe Ricketts, founder of TD Ameritrade, and his politically active son, Todd—is in that universe. Among those GOP politicians who have found time to meet with the Ricketts family in the last year, according to a person close to the family: Christie, Cruz, Paul, Walker, 2012 vice presidential nominee Paul Ryan, and former Florida Gov. Jeb Bush.

4. One event that is penciled into many 2016 aspirants' calendars is the March leadership meeting of the Republican Jewish Coalition, a gathering of some of the wealthiest GOP donors in the nation.  The gathering is held at The Venetian, Adelson's Las Vegas hotel. Among the expected attendees: Bush, Christie, Walker, and Ohio Gov. John Kasich.

5. New York Jets owner Woody Johnson, one of Romney's biggest financial backers, opened up his home for a Republican National Committee fundraiser last fall, a huge portion of the potential 2016 field—Christie, Ryan, Paul, Walker, and Sen. Marco Rubio of Florida, among them—made sure to show up to schmooze.