Dumb Ron Johnson doesn't want to fix the Post Office, he wants to destroy it!!! And Big Business in Wisconsin is Pissed Off.

Tea party zealot Dumb Ron Johnson is starting reveal his true intentions; he didn't go to Washington to fix things, he went there to destroy things. Like the U.S. Postal Service.

I've never understood why conservatives decided they really hated the post office. It's even in the constitution for gods sake. And the odd thing is, Johnson hasn't tried to solve any problems since he took office. That inaction is about to seriously hurt the survival of the Post Office, and private industry is starting to get pissed off. From reporter Matt Pommer: 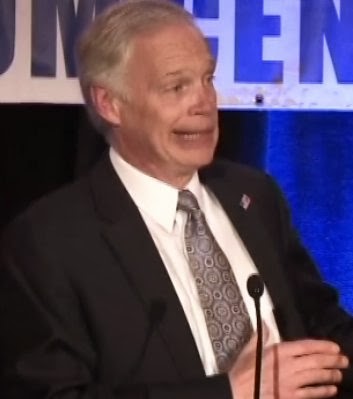 U.S. Sen. Ron Johnson is in the political doghouse of Wisconsin's largest industry. At issue are Johnson's tea-party rhetoric and committee votes on postal-reform legislation. Postal votes are a vital issue for the multifaceted mailing industry, which accounts for more than $26 billion in annual economic activity and employs more than 180,000 Wisconsin residents.

The industry warns that ever-increasing mail rates will become a disincentive … The industry had supported an amendment advanced by Sen. Tammy Baldwin, D-Wis., that would have retained the existing power of the Postal Regulatory Commission and kept the latest increase as a “temporary” measure.

But Dummy just can’t stop whining about the cost to taxpayers, even though it's not about the taxpayers, yet:

Johnson criticized the Baldwin amendment saying higher rates “could put jobs at risk,” but added, “My job is to protect the American taxpayer.”

Business is getting a taste of being on the receiving end of this ideologically driven Republican Party monster they've financed and create:

Wisconsin's mailing and publishing industry quickly issued a sharp rebuke to Johnson. It issued a public letter signed by top paper and mailing industry executives and officials at 52 newspapers. It noted the mailing industry provides about 90 percent of Postal Service revenue.


“We are confused by your taxpayer statement, considering the fact the Postal Service is funded solely by revenue from postage, most of it paid by mailing customers like us. No taxpayer dollars are used to fund the Postal Service. The real threat to the American taxpayer is allowing the Postal Service to price mailing out of the market, causing steep declines in mail volume that will further destabilize the Postal Service financially and lead to a taxpayer bailout. Postal reform is critical, but only if it accomplishes the goal of encouraging customers to use the Postal Service, which in turn will keep business costs reasonable and protect Wisconsin jobs,” the letter said as the committee prepared for a decision.

We ask that you join your fellow senator from Wisconsin and allow the Postal Service to right-size, innovate, reform health care costs and create a postal system which reflects the 21st century,” it concluded.

Baldwin's plan never got a chance. The committee chair offered a plan that advanced to the floor of the U.S. Senate and that severely limits the power of the Postal Regulatory Commission. Joel Quadracci, chief executive of the printing-industry giant QuadGraphics, told the Milwaukee Journal Sentinel, “It will result in reduced mail volumes and further acerbate the Postal Service's financial trouble.”

Well, that doesn't sound like Dumb Ron Johnson is solving the problems of big business either. In fact, Johnson complained about what he will ironically force the taxpayers to do someday:

Johnson's response to the industry letter suggested he hadn't changed his emphasis on the taxpayer. “The Postal Service is on a crash course. If it is not fixed, it will need a taxpayer-funded bailout.”

Pommer ends his piece with this:

There are many elements of the industry, including small, medium and large firms. It includes paper manufacturers, publishers, marketers, catalogers, magazines and newspapers. In Wisconsin, it means a lot of jobs.