Right winger Ben Shapiro likes to think of himself as an intellectual, a smart as a whip attack dog against liberal thinking. His ridiculous book about the liberal media is laughable, having watched his presentation on Book TV. He's a conspiracy theory nut. But he talk's fast, so he's smart? 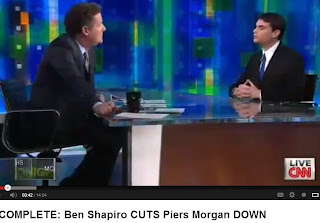 So it was just as funny watching the long awaited clash between Shapiro and the media "bully" Piers Morgan. Shapiro's only argument centered on abolishing the Second Amendment, when he tried like hell to get Piers to declare a ban on hand guns. That's all Shapiro had. Piers never suggested that.

Oh, there is one more thing; what I assumed was a proposal to make it unlawful for someone to be a bad gun owner, which might be a little harder to detect. Hmm, mandatory prison?

As you can see by the screen capture to the right, Shapiro CUTS Piers Morgan DOWN. It's just more of that fantasy world stuff. But you be the judge. WARNING: You'll want to slap the little shit.