Remember when Democrats spent hours and hours debating Act 10? Well, apparently that was too much work for some of them and a source of irritation for Republicans, so they both gladly went along with...believe it or not, time limits. 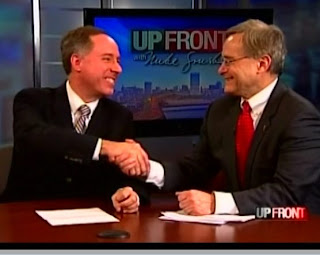 jsonline-Jason Stein: State Assembly leaders from both parties struck a deal Thursday to cut down on their body's frequent and contentious overnight sessions, with time clocks installed to track the length of future floor speeches. Last session, the debate over Gov. Scott Walker's legislation repealing most collective bargaining for most public workers stretched more than 60 consecutive hours and bitter debates in the body often degenerated into spiteful, insulting speeches. The time limit set for Thursday's debate was five hours, and the lawmakers easily finished in less time than that.

I'm so unimpressed, and so speechless. Is this Peter Barca’s idea of getting along…acting like kindergartners? Here's WISC 3's coverage:

The Republicans don't need the Democrats, and they're lazy taxpayer paid freeloaders. So instead of Democrats fighting for their constituents, they'll now stop in mid-sentence and let the Republican majority bury them? Brilliant.

…strictly following the scheduled start time; minimizing the number of contentious bills on any session day; and ensuring a minimum of 30 minutes of debate on the final vote on each bill unless leaders of both parties agree otherwise.

In what I think is a career ending comment, Barca sighed and reasoned:

...that such limits are common in Congress and that they can actually make for better speeches.

And if Democrats eventually don't go along with this childish behavior:


If the agreement between parties doesn't work out, Republicans are prepared to impose harsher rules later in the session on ending debate, Vos said .

What is it about conservatives and their condescending dress codes:


The Republican majority adopted a resolution to require lawmakers to wear a tie and sport coat on session days members of the public in the Assembly's overhead galleries, including outlawing all recording devices, signs and hats ... prohibit bags and briefcases, which will require the installation of lockers at an undisclosed cost. But Republicans left in place their rule from last session allowing concealed guns and other weapons for people with a valid permit.

We have gone completely mad. Thank you Wisconsin voters.