Well, I didn't hear anything about the following state ranking on job creation in the State of the State speech tonight. But it bears repeating often, especially to the Walker thugs who never get to hear this stuff on talk radio. 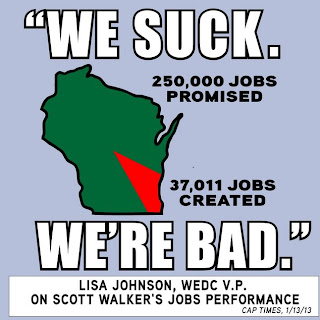 Democratic Party of Wisconsin’s Graeme Zielinski: The language in the subject sounds a little rough, but I’m not the one who said it. This is a direct quote from someone at the top of the Walker administration talking about Scott Walker's dismal record on job creation. Talking to TheCapital Times over the weekend, Lisa Thompson, the vice president of Scott Walker’s scandal-plagued Wisconsin Economic Development Corporation, offered this tart assessment from the New Economy Index from the Information Technology and Innovation Foundation of the Walker administration that has Wisconsin ranked 42nd in the nation when it comes to job creation:

And in a quote that is perhaps AT LEAST as damning, Thompson said, "We have to do things differently."

Scott Walker is doing to Wisconsin is the same thing he did to Milwaukee County -- leaving it in shambles and blaming everyone else for his failures.

From Blogging Blue, this comment from a regular visitor here as well, that sums it up:

Gareth: Republicans are opposed to high-speed internet unless it is controlled by big corporations. They oppose high-speed rail, period, because the highway builders’ lobby keeps stuffing money in their pockets. They oppose renewable energy and wind power because the Koch brothers don’t own it and it’s hippie stuff anyway. They cut funds from the public school system so that it will fall apart and eventually be privatized. They attack teacher salaries and workplace rights so that the best teachers end up leaving the state. They attack salaries and pensions in the University system, as well as domestic partner benefits, all of which deter highly qualified intellectuals and researchers from coming to Wisconsin. They attempt to have Professors fired for exercising their civil and academic rights of free speech. They want to micromanage research at the University, further discouraging the hiring of the best scientific talent. And then all they can say is “We suck at job creation”. They don’t have a clue.