Defeating Gun Control brings out the Ugly: Now's not the time for Civility?

The truth is, the bullet riddled bodies of 20 1st graders doesn't take precedent of over the imagined loss of constitutional rights by a ruthless movement of selfish mentally impaired numskulls. If we did go after the mentally ill as they so conveniently suggest, these blood soaked Americans  would be the first to lose their guns.

So imagine the father of one lost 1st grader being interrupted by a knuckle dragging protester! Yeah, what's wrong with that grieving father, speaking out like that, he should be silenced.

"The Second Amendment!" was shouted a couple of times by as many as a dozen gun enthusiasts in the meeting room as Neil Heslin, holding a photo of his slain 6-year-old son, Jesse Lewis, asked why Bushmaster assault-style weapons are allowed to be sold in the state. "There are a lot of things that should be changed to prevent what happened," said Heslin, who said he grew up using guns and was undisturbed by the interruption of his testimony.

"That wasn't just a killing, it was a massacre," said Heslin, who recalled dropping off his son at Sandy Hook Elementary school shortly before Lanza opened fire.

As usual, it's opposite day every day in Republican world: would "another responsible gun owner" be willing to do nothing at all? This is an insult to bumper sticker slogans. 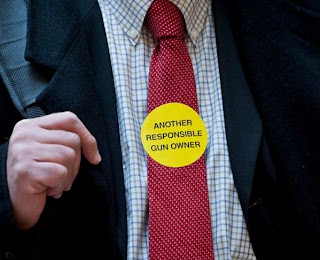