Republicans must be appalled that liberal Madison is doing so well. Enjoy it while it lasts, Walker oversees all: 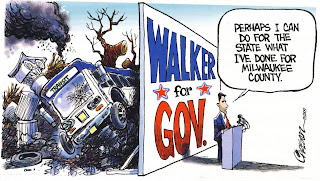 Channel3000: A national financial news and opinion online publication has declared Madison to be the second-best-run city in America. The website, 24/7 Wall Street, researches and publishes articles on financial and market information.

The article cites Madison's low unemployment rate of 4.9 percent in 2011, which was the second-lowest among all large cities in the U.S. It also cites Madison's Aaa credit rating, and a city ordinance that bans the government from using emergency reserves to fund the operating budget, unless two thirds of council membership vote otherwise.

In awarding the ranking to the city of Madison, authors cited the local employers in fields such as technology and health care. The article also noted that 54 percent of the city's adult population has a bachelor's degree, the third-highest rate among the top 100 largest cities.