Holy Crap! Paul Ryan would like to have a Closed Door, Big Government Authority.

Damn those public debates. Conservative voters apparently don’t need to know how and why laws were passed, they just need to agree with them. There, that was easy.


Defending policy and answering questions from voters is so messy, time consuming and way too pubic for Paul Ryan. People might actually learn something, and who knows, change their mind. From CNN: 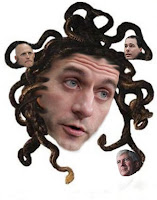 Rep. Paul Ryan: "Now that the president is implementing his agenda, we'll see that the benefits are far less than advertised." He urged party members to take their disagreements behind closed doors and "challenge the left, not each other." "A healthy debate is a good and needed thing. We can deliberate in private without fighting in public," Ryan said.

So behind closed door fights, debates and disagreements is what the founding fathers envisioned as a representative government? I kind of missed the part were the voters had a say in their decisions.

But in the market place of idea's, the public should have a chance to determine which side they feel more comfortable with. It may also run counter to Ryan's goal of top down control, by eliminating healthy and moderating fights with each other, even questioning a politicians motives when necessary...but as Ryan points out, "We can't let that happen."

Oh, and Obama the all-powerful has the ability to force Republican to fight each other? Ryan is blaming Obama for their in-party squabbling.


jsonline: Ryan said conservatives should not be baited into “playing the villain” against Obama in the president's second term, or driven to distraction by him. "We can’t get rattled,” he said. "He’ll try to get us to fight with each other – to question each other’s motives – so we don’t challenge him … We can’t let that happen. We have to be smart."

UPDATE: I just found this interesting conflict: The conference where Ryan made many of these comments featured a panel discussion that basically whined and complained about the very things Ryan offered up. Yikes, did anybody else notice this?


jsonline: A conference on the future of conservatism: During panel discussions at the event, some conservative analysts faulted their side for "choking off debate" within the GOP and demanding too much ideological conformity. Some faulted the party for failing to more aggressively court voters outside the party's base. Some urged the party to speak more directly to bread-and-butter, populist concerns such as the cost of education and health care, and chastised the GOP for using harsh and unfriendly rhetoric on issues such as immigration. Some complained that with a few exceptions, Republican members of Congress wasn't generating new policy ideas.