If only we can root out the evil in human nature...wait, that’s it.


The solution to gun violence is not the physical weapon itself, but the inner evil that has gripped human nature since the beginning of time. 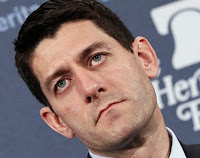 We should cleanse the human spirit first, by teaching right and wrong to those trapped in poverty, as Paul Ryan exposes, or perhaps revisit the historically “popular” program that experimented with human eugenic research.

All better options than trying to regulate “hardware,” or trot out the tired list of reasonable laws that have worked in other countries.

Rep. Paul Ryan wants us to focus on “the causes of violence” and “the culture that produces this kind of thing.”

Newsmax: "We need to look beyond just recycling failed policies of the past. ... Let's go beyond just this debate and make sure we get deeper. What's our policy on mental illness? What's going on in our culture that produces this kind of thing? You know, we need to have that kind of a discussion and debate," Ryan said.

Would that culture be part of our gun crazy fanaticism that feeds into the paranoia of losing Second Amendment rights? Would that culture produce slogans like “They’re coming to take our guns?” Or should we go deeper, and debate this for another 100 years after hundreds of thousands die needlessly? I can see why Ryan is hesitant.

Good idea, except Republicans don’t believe mental health should be a required covered illness. In fact, a free market system wouldn’t require any coverage or reporting of a person’s mental problems at all. Oh, but we can cross that bridge when Republicans do away with Obamacare.

By the way, if allowing this gun carnage to continue, or turning down disaster aid to victims isn’t a mental illness, than what’s the point?
Posted by John Peterson, Democurmudgeon at 1/28/2013 01:11:00 PM