Ryan brings back "Fetal Personhood" Law. Have we had enough yet?

Okay, can we now vote a known serial liar and draconian social policy wonk out of office. He's already introduced Medicare killing policy, now he wants everyone in the country to strictly adhere to Roman Catholic doctrine. There's nothing constitutional about the kind of government Ryan envisions for the U.S.! 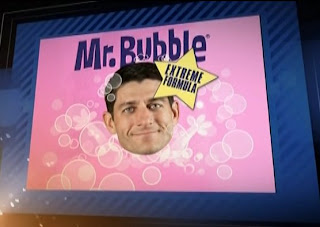 Raw Story: Rep. Paul Ryan has signed on as cosponsor in a draconian new bill aimed at curtailing women’s reproductive freedoms … in spite of the defeat of so-called “fetal personhood” laws in 2012, Ryan (is) forging ahead with a new measure that classifies all embryonic tissue as a human life from the moment of fertilization. The measure specifies that a “one-cell human embryo,” even before it has implanted itself in the uterine wall and resulted in a pregnancy, should be granted “all the legal and constitutional attributes and privileges of personhood.”

Ryan cosponsored the bill called the Sanctity of Human Life Act. Ryan re-introduced it on the Hill last week.

Americans aren't clamoring for this. But Ryan is convinced he knows what’s good for all of us, even if the most conservatives states and one court have already sent a clear message:

A measure trying to establish the citizenship rights of fertilized eggs was voted down by a margin of 16 points in Mississippi, one of the most conservative states in the nation.  Petitions to get fetal personhood measures on the ballot in Oklahoma, Ohio, Oregon, Montana, Nevada, Arkansas, Florida and California all failed to receive enough signatures to qualify. An Oklahoma court struck down that state’s “personhood” law on the grounds that it was plainly unconstitutional and imposed unreasonable restrictions on women’s ability to make their own reproductive choices.

Ryan famously gaffed in Aug. 2011 when he told an interviewer from Wisconsin’s WJHL that whether or not a woman is raped, the fetus she is carrying must be protected from harm. “The method of conception,” he said, “doesn’t change the definition of life.”