This may be a little bit in the weeds, but a fascinating peek into the convoluted wonkiness of Paul Ryan. In this revealing look by Jonathan Chait, from his article “Paul Ryan Breaks Down Under Wonkterrogation,” Ryan hides pure ideological mumbo jumbo with accounting terms that when taken together don't mean anything. 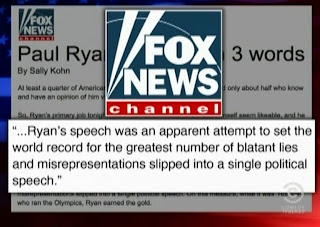 Ryan usually manages to elide the contradiction between the irreconcilable hopes placed in him by evading questioning, using weasel words, or just filibustering long enough to exhaust the topic. That’s what makes his talk Wednesday with Ezra Klein … Ryan tried to evade the question, but Klein wouldn’t let him until Ryan had made it perfectly clear he would not accept higher revenue at all, under any conditions.

Ryan claims Obama got his tax increase, so now owes Republicans their cuts:

Ryan simply hurls up nonsensical rationales one after another, and finally offers his actual reason when he has run out of gibberish. “They already got their revenues,” Ryan said. “So what, we’ll roll over and they get more revenues? We’ve yet to get anything as a result of it.”

But Ryan’s lying, as revealed in this response calling him out on his spending cut omission:

There were $2.2 trillion in spending cuts in 2011. So you could just as easily say Republicans already got their spending cuts and there should be no more, right? Ryan replies:

Notice how fast Ryan has flipped his logic. First he asserts that there can’t be more revenue because we already increased some revenue. When reminded that we cut spending even more, he says it’s “last session” and irrelevant. Ryan was asked this very thing. ("If you have a bill that has real spending cuts in it and you add $700 billion of revenues, does that mean that the spending cuts aren't real anymore?") Ryan's reply:


"Well, look, I’m not going to get into that." Yes, why get into the inherent logical fallacy that undergirds your entire argument?]

Ryan then circled back to his “we already increased revenue” point, and then got to his real position: “And by the way, I think that revenue level is way too high, I don’t see how you get there.” (This) final confession is the tell. Ryan opposes more revenue because he thinks revenue is too high. He would like to cut spending, but keeping taxes low is the maximal priority.

If you like Republican anti-tax orthodoxy, you’ll like Paul Ryan. (Ryan mentor and current Kansas governor Brownback is currently implementing a plan, the most explicit version of Ryan's budget, to raise taxes on the poor while cutting them on the rich.) If you think Ryan’s the guy to change that orthodoxy, you’re kidding yourself.