Since the 2010 Republican electoral surge, we've seen how they would run state and federal government. Every example of their winner-take-all attitude, uncompromising agenda, and disregard for those Americans who are not conservative, shines a bright light on what would be a dictatorial and authoritarian government under Republican control. Not exactly the government our founding fathers envisioned. 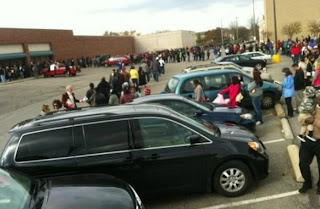 Gerrymandering the electoral college votes is next, after voter ID and voter suppression didn't work as planned:

Orlando Sentinel: The long Election Day lines around Florida may have turned away more than 200,000 frustrated would-be voters who gave up and went home before they cast ballots — or else saw the lines and elected not to join them. Analyzing data compiled by the Orlando Sentinel, Ohio State University professor Theodore Allen estimated last week that at least 201,000 voters likely gave up in frustration on Nov. 6, based on research Allen has been doing on voter behavior.