What is it about Republicans who recycle the trash with employment decisions that would only make them look bad?
Herman Cain recycled trash by hiring Mark Block, his chief of staff.
From On the Capitol, Clay Barbour and Mary Spicuzza: 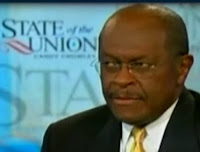 Did you know that Cain's chief of staff is none other than Mark Block, former head of Wisconsin chapter of Americans for Prosperity?

Block was fined $15,000 and banned from Wisconsin political campaigns for three years, from 2001 to 2004, after being accused of violating election laws in 1997 as the campaign manager to state Supreme Court Justice Jon P. Wilcox.