As we get nearer to universal health care, the warnings of health care rationing by Republicans is now something they themselves are promoting. The Democratic standout is Hawaii, with the shortest proposed stays each year. Go figure. USA Today: 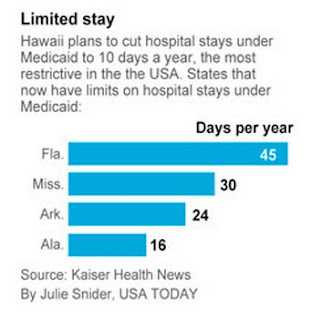 A growing number of states are sharply limiting hospital stays under Medicaid to as few as 10 days a year to control rising costs of the health insurance program for the poor and disabled. Advocates for the needy and hospital executives say the moves will restrict access to care, force hospitals to absorb more costs and lead to higher charges for privately insured patients. States defend the actions as a way to balance budgets hammered by the economic downturn and the end of billions of dollars in federal stimulus funds this summer that had helped prop up Medicaid, financed jointly by states and the federal government. Arizona, which last year stopped covering certain transplants for several months, plans to limit adult Medicaid recipients to 25 days of hospital coverage a year, starting as soon as the end of October. Hawaii plans to cut Medicaid coverage to 10 days a year in April, the fewest of any state.

In an ironically outrageous twist:

All of this means we're about to see bigger increases in medical costs and insurance premium hikes, not because of health care reform, but because of rationing.

Hospitals won't discharge or refuse to admit patients who medically need to be there, said Peter Wertheim, spokesman for the Arizona Hospital and Healthcare Association. "Hospitals will get stuck with the bill," he said.