Loved the way the national media is picking up on Rep. Paul Ryan's continued tirade of absurdities. From The Washington Monthly and Steve Benen:

I’d hoped to be first to the scene on this one, but Yglesias beat me to it. It’s a fun story anyway, though.

An alert reader passed along the latest fundraising pitch from the Republican National Committee, ostensibly sent by House Budget Committee Chairman Paul Ryan (R-Wis.). The lede is a stunner. 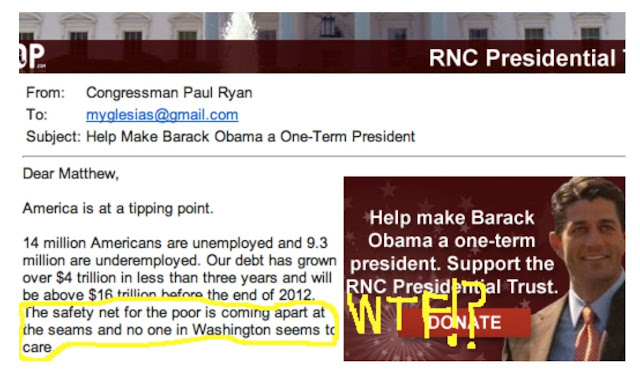 But putting that aside, a Paul Ryan letter sent by the RNC is concerned that “the net for the poor is coming apart at the seams and no one in Washington seems to care”?

Ryan is the one swinging the machete at the safety net precisely because he doesn’t care. Put it this way: there’s only one party in Washington trying to slash spending on unemployment aid, student loans, food stamps, and job training, and I’ll give you a hint, it’s not the Democrats.

That said, if the RNC believes concern for the safety net is likely to appeal to Republican donors, it’s probably safe to say the Occupy movement has already changed the national conversation in rather fundamental ways.

Here's a compilation of clips that assume higher taxes on the wealthy won't work, despite facts to the contrary;