District gerrymandering didn’t do the trick? Hey, we only want to be fair, really.

So just to be fair and clear up any confusion, the reckless Republican legislators who couldn’t shoot straight would like to change the new district now, before any possible recall election gets underway.

After all, the old districts haven’t flipped yet making them conservative strongholds in future elections.


But they’re not doing that… 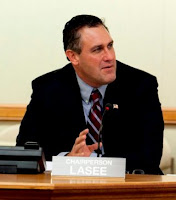 jsonline: The new maps generally favor Republicans. By holding recall elections in the old districts, Democrats would have an advantage as they try to flip one seat in the Senate to take control of that chamber.

Sen. Frank Lasee (R-De Pere), a member of the Senate Transportation and Elections Committee, said he favored changing the law to put the new set of maps in effect now. That would clear up some confusion, create some new issues and give Republicans the upper hand in recall elections. "It's just plain confusing," Lasee said. He added that making the new maps effective now - instead of in November 2012 - would "clarify things."

Labels: Redistricting
Email ThisBlogThis!Share to TwitterShare to FacebookShare to Pinterest