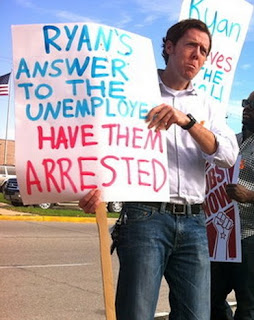 Well, what do you know, Paul Ryan's bunker strategy is over;

WLS: Rep. Paul Ryan is planning to hold six town-hall meetings in southeastern Wisconsin in the next two weeks, starting with events in Waukesha and Milwaukee counties … listening sessions in Muskego and Oak Creek on Thursday. A third event is scheduled for Friday in Racine. A coalition of groups who want Social Security and Medicare preserved is planning protests Thursday. Ryan is scheduled to visit Janesville, Elkhorn and Kenosha next week.

I found this funny and very authoritarian article in the Muskego Patch, by a guy who I’m sure never objected to the tea party protesters shouts and disruption of town-halls during the health care debate.


Read as he pushes the Scott Walker talking point that “outsiders” are out to cause chaos in Wisconsin, especially at each of the Ryan town halls.

The Patch: While I'm hoping to cover the Q & A inside, I'm also going to be asking those protestors where they are from.  I doubt any will be from Muskego, much less Waukesha County or the First Congressional District.  I do hope they respect those of us residents who have an opportunity to talk with our congressman in our own hometown … I also hope they realize that small communities like ours have small police forces that have better things to do than spend hours preparing roadways, control crowds and enlist mutual aid from other smaller communities' forces to help them out.

The writer also thinks liberals rehearse disruptions, like Republicans do I guess.

At Ryan's appearance at Klemmer's in September, protestors were choreographed throughout the meeting to stand up, disrupt and be forcibly removed by police from at least four different departments.  It wasn't what democracy looks like, because honestly our forefathers envisioned the open exchange of ideas, and not a shouting match. Ryan said at the time, 'welcome to the new normal.' If that really is the case, we all lose.

Yea, I’m sure the founding fathers were concerned about lively town-hall debates. I guess we all lose if the American people protest the their government too.

BRAVO to Politifact: They brought up something relevant in their research, and made a great point:

Even a 100 percent tax on millionaires would only fund four months of government operations, failing to seriously address budget deficits and debt.-Paul Ryan on Sunday, October 9th, 2011 in a television interview.

By our calculation, the U.S. government would have taken in $800 billion more in tax revenue if it had taxed people making more than $1 million at 100 percent, according to IRS data from 2008, the year Ryan used as his base point. That doesn’t make much of dent in America’s $14 trillion debt, to be sure.

But if we’re talking about the deficit, which Ryan did on "Meet the Press," that $800 billion would have wiped out the 2008 deficit -- with another $370 billion to spare. Looked at that way, the number undermines Ryan’s larger point.

He misfires in suggesting a limited budget impact from such a hypothetical tax. In the year he chose, the federal deficit would have been wiped out. So, Ryan is close to the mark on his math but the details work against his overall point. We rate his claim Half True.