Guns in the Gallery!!! 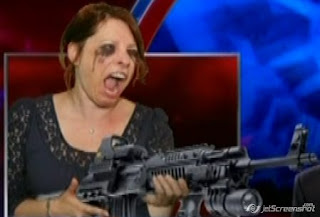 The state constitution allows cameras and signs in the Capitol and Assembly gallery. Yet protesters are being arrested all the time for exercising their right to video tape their representatives in action, and carry signs. Now state legislators are allowing guns in the Assembly gallery. And claim people won't be able to use them there either. Good luck with that too.


jsonline; On Tuesday, a dozen people were removed from the Assembly galleries and arrested for videotaping proceedings and holding up signs.


Vos said he did not see a contradiction in allowing guns in the galleries while banning the use of cameras. He said people could bring both guns and cameras into the galleries, but couldn't use either.


"You can have a gun in the gallery, but you can't shoot," he said. "People who carry concealed can come in my office, I don't care," said Rep. Robin Vos (R-Rochester).


Senate Minority Leader Mark Miller (D-Monona) said, "I don't think there should be weapons in the Capitol," Miller said. "People should be able to enter public buildings and feel safe. . . . There's children who come in the building, for Pete's sake."