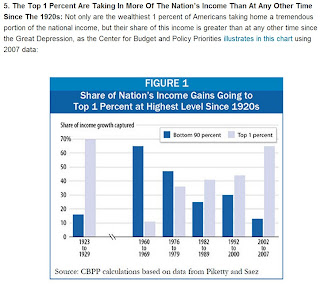 Dumb Ron Johnson is another conservative authoritarian who knows so much more than 75 percent of the public.

You might have noticed a theme at Democurmudgeon. I'm hoping the word "authoritarian" starts getting tossed around a lot more by the press, because it's at the root of the Republican Party's problem and an actual threat to our democracy.

While Johnson is confronted by the 75 percent public approval of taxing the wealthy, he insists that's not the real problem, and the public doesn't know better. He knows something we don't apparently, even though the poor to wealth gap has never been larger (click picture to enlarge).

And isn't that part of Johnson's problem, he tries to be realistic, but fails miserably. The wage disparity tells him nothing because it simply doesn't fit into his narrative, his ideological Dickensian vision.