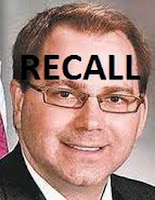 Ripped from his own stunning press release:

State Representative Chad Weininger, a former election administrator himself, is calling for a series of reforms that he says will "restore sanity to a recall process that has been hijacked by special interests."

Weininger's proposals are aimed at curtailing the practice of special interest groups and political parties paying thousands of workers, often from out of state, to collect recall signatures from "eligible" voters - many of whom have little to no actual voting record.

I’ll get to the eligible voters issue in a moment. But is Weininger talking about those horrible out of state organizations and special interest groups, crooked ones at that, that helped the Republicans gather signatures? Ooops. Surely he reads the newspapers?
The first part of his regulation (I thought Republicans hated regulations) is a two part doozy: Being required to disclose who’s paying a canvasser leaves the actual issue or politician being recalled out of the initial conversation, making potential signers less likely to sign, based on nothing more than hating the group behind the petition.
Even worse, Weininger provides a sample petitioners opening greeting below, that requires a canvasser to give their own address to a complete stranger who may not sign or disclose their own name.

Legislative Proposal Example: Paid political peddlers would say at the door, “Hi, I'm (state name) and I live at (state address) and I'm being paid by (name of organization paying the person) to influence you to (vote for, or sign the following papers).” This will help cut down in the aggressive tactics that can occur by circulators.

Right, the canvasser will actually “influence” me because I have no will of my own against “aggressive tactics?” Welcome to the Republican nanny state.
But I saved the best for last. If you’re a new voter or someone so fed up with the party in power you’ve decided to start voting again, you will have lost your Constitutional right of free speech to address your government for awhile...

Amending the Wisconsin Constitution to require that a person signing a recall petition must have voted in the election for which the recall is being sought.  For example, in order to sign recall petitions against state senator, an eligible voter would have had to vote in the most recent election in which that state senator was on the ballot.

Would it be to bold to suggest a glaring streak of authoritarianism in Weininger’s proposed amendment? In a representative democracy like ours, this outrageous proposal should be enough to recall Weininger himself. Coincidentally, there's already a Facebook page for that.
Posted by John Peterson, Democurmudgeon at 10/17/2011 11:03:00 AM