Tennessee Republican Representative Diane Black couldn't have been happier about the possible dismantling of the Affordable Care Act. In fact, she relished this possibility:

"Even more worrisome is what implications this could have for Americans who have already received subsidies and may be on the hook for back taxes."

A little known and overlooked sentence in the ACA could take away the tax credits in states that use the federal exchange. The Hill: 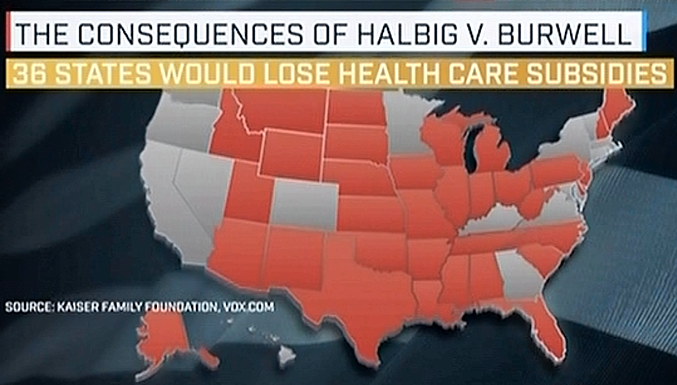 The Supreme Court on Friday agreed to take up a new challenge to ObamaCare that Democrats fear could dismantle the healthcare law.

Here's what the challenge is based on:


In setting up the subsidy scheme, Congress said it would apply to exchanges “established by the State.”

According to the 5 authors of the law:

The supreme court is supposed to rely on Congressional intent when interpreting the law, but as we've seen, legal tradition and precedent don't amount to a hill of beans anymore.


The case, King v. Burwell, rests on whether the federal government can legally hand out healthcare subsidies in 34 states that have opted out of creating their own exchanges. About 87 percent of people enrolled in ObamaCare receive the subsidies.

If the high court rules against the premium credits, it would gut a core component of the law that’s already gone into effect for more than 4 million people in the U.S.

Governors could still set up their own exchanges to safeguard their constituents coverage, but that's not going to happen after the midterm Democratic blowout.

More than $36 billion in subsidies could be lost if the court sides with the law’s opponents, the report found. The ruling would a “domino effect” on other parts of the law, the researchers said.

Rep. Diane Black (R-Tenn.) applauded the court’s decision to take up the case: "Even more worrisome is what implications this could have for Americans who have already received subsidies and may be on the hook for back taxes."