For most of us, it makes sense. But “stand with Walker” supporters contend we’re all a bunch of dipsh**s and dummies when defending Scotties policies. Hard to argue with that rabid reasoning. 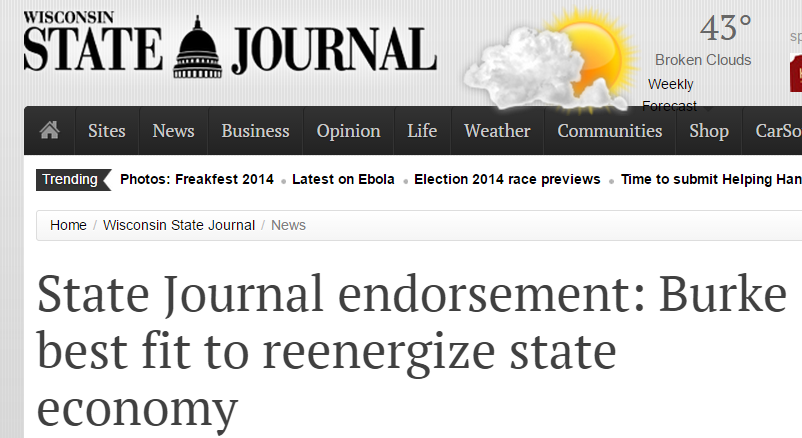 The State Journal editorial board endorses Burke for governor in Tuesday’s election: A pro-business Democrat, Burke isn’t your typical Madison liberal. The teachers union opposed her bid for Madison School Board. Burke isn’t flashy. She’s matter of fact and analytical. She has integrity, heart and smarts.

Burke earned a finance degree from Georgetown and a master’s degree in business administration from Harvard. She quickly became an entrepreneur … Trek reports that its European sales soared during her tenure. She later served as director of forecasting and strategic planning for nearly a decade.

Free-market Republicans have oddly attacked Burke for outsourcing jobs at Trek. What she and her family’s company really have done is succeed in a highly competitive global marketplace.

So it’s easy to dismiss as last-minute politicking the accusations last week by two former Trek executives. The two men — both conservatives who back Walker — questioned Burke’s success as a young woman running Trek’s European division more than two decades ago. One of the critics is a highly partisan Republican Party official who was fired from Trek and lacks credibility. The other had a falling out with the Burke family years ago after he took over a rival company.

As governor, Burke wants to capitalize on university research. Wisconsin is a leader in filing patents yet lacks the private investment needed to push great ideas into the marketplace. She would quadruple Walker’s inadequate $30 million venture capital fund to leverage more private dollars for innovative small businesses. Unlike Walker, she would allow the fund to invest in biotechnology.

Walker’s signature jobs agency, the Wisconsin Economic Development Corp. (WEDC), has been sloppy and disappointing. State exports slipped last year, and job growth has been slow — less than half what the governor promised. Walker’s first term was bogged down by his repeal of collective bargaining … he could have achieved many of the same results — without two years of tumult — by suspending collective bargaining, rather than ending it … once the state’s balance sheet improved, the governor and Republican-run Legislature prioritized showy tax cuts over fiscal responsibility. Now a $1.8 billion budget shortfall looms, plus $1 billion in spending requests.

Our editorial board met with both candidates for governor, and we’ve closely followed their public lives and careers. Our endorsement of Burke isn’t a prediction of who will win. It’s who we believe is best to lead Wisconsin forward. Mary Burke is that candidate.