Funny thing on the way to a Republican one party police state, those standing up for their constitutional rights were denied food stamps. Think how far Republicans can push drug testing for whatever they eventually feel needs a little tough love.

Even worse, Americans don’t understand what Republicans mean when they insist on changing federal programs to state controlled block grants; no federal strings attached to the block granted money, which means the GOP can require any test they’d like to penalize and choke off benefits. Cruel? They’d tell you to get a job, the kind they know will never be created through tax cuts.

Let’s take a look at what’s already happened with drug testing that ended up costing taxpayers in Missouri $25,000 for each of the 20 positive tests…don’t complain, it’s the principle that matters. WSJ:

In Missouri, over an eight-month period, 636 drug tests were administered, yielding 20 positive tests at a cost of $500,000, the Kansas City Star reported in December. Two hundred people refused to take the tests and were denied benefits, the Star reported.

200 people might have refused the drug test as a way to protect their constitutional rights. Ask any tea party member of a 501(c)(4) if they would take a drug test to exempt themselves from paying federal taxes? 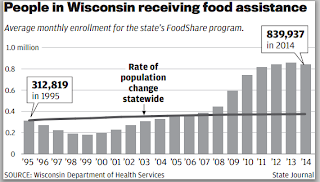 Scott Walker iisn'tlooking out for the taxpayers, he’s using that empty excuse to push is ideological doctrine that sometimes saves money, but most of the time wastes it (like the Medicaid money).

And look at the chart showing the rise, fall, and rise again of food stamp assistance. Come on, this is an easy one.

The rise and fall coincides with the economic job swings seen in the Bill Clinton years through Bush and the Great Recession. Businesses large and small were wiped out and those that did survive changed their business model to a bare bones full time staff with part timers brought in only when seasonally necessary. The chart has nothing to do with freeloaders or drug addicts.
Posted by John Peterson, Democurmudgeon at 11/11/2014 07:24:00 PM