Hey, I'm just a city boy, but isn't it time farmers knew what their conservative best buddies did to them before it's too late?

As it originally appeared back in August of 2013: Republicans have bashed the estate tax for supposedly destroying family farms, small businesses and taking a person’s hard earned money away. 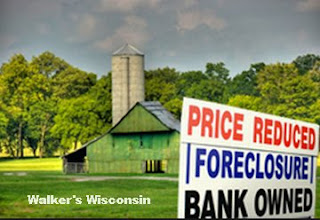 Who would have guessed the Scott Walker Authority would have sneaked in a way to do what the estate tax did, and even more?

I've always argued that farmers should be voting Democratic, because Republicans have done everything they can to take their farms and health dignity away. Hell, they don’t even care about high speed internet access in rural communities.

Farmers and small family businesses, wake up, you’re about to lose it all:

Post Crescent: Provisions buried in the new Wisconsin budget dramatically expanded the state’s ability to claim dead couples’ joint property, such as Green Bay Packers tickets or the family farm, to recoup Medicaid expenses — even if the assets are protected in trusts … (to) recover Medicaid money spent on a number of long-term care programs which helps keep disabled and elderly people out of costly nursing homes.

These are the kind of people that are easily targeted and vulnerable.

The state has prioritized recovering every dollar spent on Medicaid over families’ well-being, said Carol Wessels, a Wauwatosa attorney and former chair of the state bar’s Elder Law Section Board of Directors. “My clients are stunned,” Wessels said.

Federal law requires states to recover Medicaid payouts … The state budget language goes far beyond that … would allow DHS to claim property even if it’s not subject to probate, a legal process creditors can use to settle debt after a death, or held in a trust, to protect property from probate.

Republicans targeted small businesses and family farms for dissolution or sale to who knows who… corporate buyers, for what? They changed what didn't have to be changed, to supposedly “protect taxpayers,” the old stand by excuse that shows no mercy.

The (old) regulations allow applicants to transfer some assets, such as interest in a business, at less than market value without penalty. The Wisconsin budget eliminates that exemption, which means a Wisconsin resident seeking Medicaid coverage for long-term care would have to sell his or her assets, such as a share of a family business or farmland, for full market value even if it was going to a child.

If rural voters continue to support Republicans, they won't have anything left under the Walker Authority's rule. It's true Walker gave agriculture a huge tax cut, but at what price?

But the estate tax, well that affects the really wealthy so they will continue to oppose that.