Will the Democratic Party stand for something? Please?

I think Thom Hartmann's take on why the Democrats lost the midterm election in such a dramatic way is right on the money. His statement is included at the bottom. And yes, it's what I've been saying here for years. But first...

...what is most heartening? How so many other Democrats have come to the same conclusion; Stand firmly behind the party's populist agenda, and pound that message into the American psyche, just like the Republicans have done for decades. We've got to stop being the abused partner in this political relationship and fight back.

This Voxdotcom graph offers up the obvious: 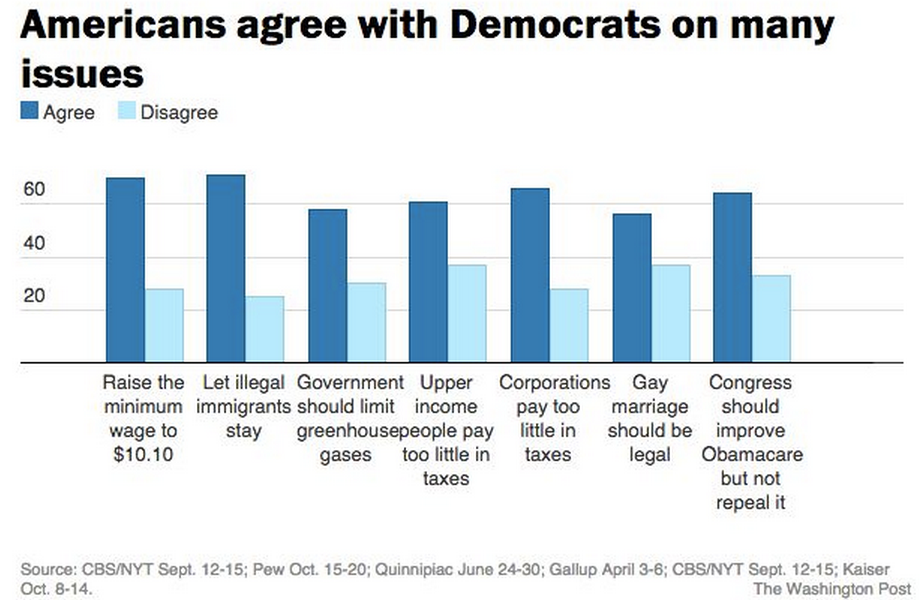 How can you lose with that kind of support? The Democrats found a way. Wake the hell up guys.

As Zachary Goldfarb writes, voters have "fallen out with Obama, but on the biggest issues facing Congress, they still agree with Democrats on ... almost everything. That includes issues like raising the minimum wage, making the rich pay more in taxes, letting illegal immigrants stay in the United States, taking action to stem global warming, legalizing same sex marriage and fixing the Affordable Care Act rather than repealing it."

After reading Thom Hartmann's commentary, you'll wonder why the Democrats ever let things get so bad, while having so much ammunition against the Republican anti-Obama scheme:


Dear Democratic National Committee Chairwoman Schultz: You've been played for a sucker by the Republicans, and it worked. Tuesday night’s blow to Democrats could have been prevented; in fact, you could have won big, nationally. But you lost, and here's why.

Back on the night of January 20th, 2009, when most Americans were out celebrating the end of the Bush years and Barack and Michelle were dancing at the inaugural balls, a group of powerful Republicans was planting the seeds of your loss this week. The Caucus Room Conspiracy had three major objectives.

The first was to use obstruction - knowing the corporate media would call it "gridlock" as if the Democrats were responsible, too - to prevent President Obama from having any legislative success.

The second was to sabotage any legislative victories that the president did manage to win - like Obamacare - and convince the American people that they were actually failures.

And the third was to blame all the economic damage caused by Republicans on BOTH parties and then come out in a critical election like 2014 and say that Republicans are the party that will make things right in Washington as if the state of the economy was the Democrats' fault.

Instead, Democrats played right into Republicans’ hands, so the Caucus Room Conspiracy was wildly successful … as the New York Times points out, Americans had absolutely no idea what either party stood for in this election. Democrats failed to run on their platform, and to publicize the issues that Americans really care about. In 2012, the Democratic Party published their platform. Among other things, it outlined the party’s plans to put Americans back to work, grow the middle-class, reform Wall Street, reel in campaign spending, and enact sensible tax reform.

Why wasn't this platform out there for the American people to see? Democrats also need to step up and embrace their progressive base, instead of marginalizing them. Republicans are great at embracing their base, and Democrats need to start doing the same thing with the progressive movement.