Scott Walker's no Leader, and he's not saying what you think he is...

I was fascinated by Scott Walker's arrogant authoritarian advice to the Republican congress. Here's my interpretation. jsonline:


"It's put up or shut up time. Your election is a message from the American people that they want change. So go big and bold." 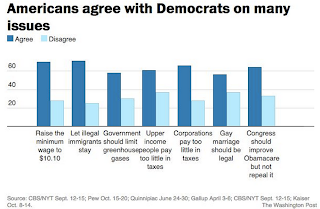 The Republicans benefit from gerrymandered districts and low midterm turnout. And the change the American people want are all things in the Democratic column, like minimum wage, immigration, gay marriage...heck look at the chart to the right. Guess what, this is the change Americans want.

Walker has always looked at "leading" as an excuse to ignore voters. And they fell for it.


"Send funds for Medicaid and similar programs back to the states in the form of block grands to encourage innovation. Reform welfare programs to restore the dignity that comes from work."

"Restore the dignity that comes from work" is a cute way to say, "I can't create jobs, but I can boot you off assistance." How about restoring dignity with a decent wage?

And Walker's way of "encouraging innovation" with block grants...I once describe it this way: No federal strings attached to the block granted money ... means the GOP can require any test they’d like to penalize and choke off benefits. Federal strings have prevented that.

Walker has ruled with a super Republican majority, how hard is that:

"And they will keep leaders who do what they say they will do. If the president does not lead as he was elected to do, this is an opportunity for Republicans in Congress to show the American people what they would do with a president who will lead."

Another Walker reference to one party rule, something he's now drooling over. I hope the Republicans do offer up a tangible plan. Paul Ryan is supposedly doing that right now on health care. I can't wait to see how the CBO grades it.
Posted by John Peterson, Democurmudgeon at 11/12/2014 12:03:00 AM